The event was held amidst rubble in the Shujai­yeh neighb­orhood, where some 100 Palest­inians died last year
By Entertainment Desk
Published: May 16, 2015
Tweet Email 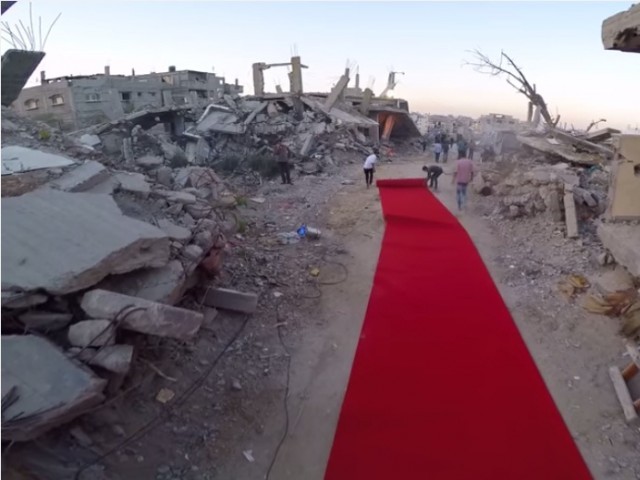 In complete contrast to the glitz and glamour at Cannes, a very different red carpet was laid out in eastern Gaza City, among ruins and memories of war and destruction, for a film festival on human rights.

The event was held amidst rubble in the Shujaiyeh neighborhood, where some 100 Palestinians died in last year’s Gaza war. According to The Daily Mail, The Karama (which means ‘Dignity’ in Arabic) Human Rights Film Festival was the first of its kind to ever be held in Gaza, and organiser Saud Aburamadan believes no other venue could have been more appropriate.

In an interview with +972 Magazine, Saud explained, “When we were looking for locations to screen the films we arrived in Shujaiyeh in eastern Gaza City, a large part of which was turned to rubble. We stood there next to the destroyed mosque, surrounded by destroyed homes in every direction, and became clear that it was the right place to hold a film festival focused on human rights.”

The red carpet was rolled out through the rubble of Shujaiya. What a deep display of resilience from these survivors! pic.twitter.com/d320Nmg4B4

In another contrast with the prestigious Cannes, which is invitation-only, the Karama Festival was open to everyone.

But the carpet also served as a painful reminder of last summer’s Gaza war, which led to the deaths of some 2,200 Palestinians – mostly civilians – and 73 Israelis. 20 things desi brides do and what they really mean