Accord­ing to report­s, both actors were in awe of each other and shower­ed praise at each other's movies­
By Entertainment Desk
Published: May 16, 2015
Tweet Email 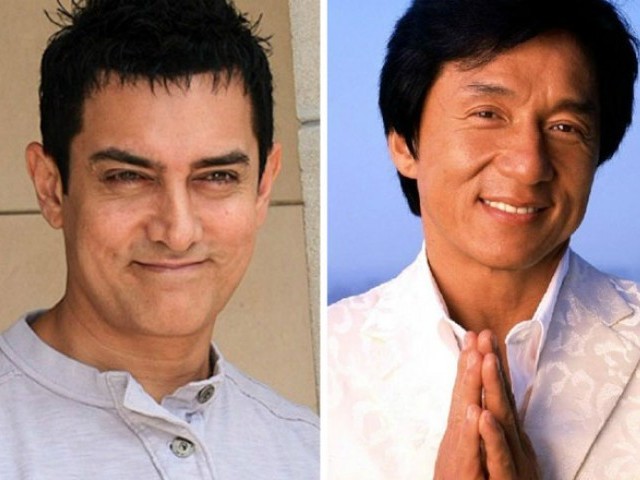 Aamir Khan’s Chinese-dubbed version of PK was premiered in Shanghai Art Center, China earlier this week. Much to the Bollywood star’s surprise, he met another legend, Jackie Chan and the two hit it off remarkably well. They will be co-starring in an upcoming venture.

According to Times of India, the two will soon be seen together in an Indochinese film. When they met at the premiere, both actors were in awe of each other and showered praise at each other’s movies . They also discussed cinema and apparently Jackie was all praises for PK and conveyed his heartfelt wishes to Aamir and the team. The China Film Group has appointed Baoqiang Wang, a popular actor from China, to dub Aamir’s lines for the dubbed version of PK.

According to Pinkvilla, Aamir and UTV Motion Pictures have joined hands with Jackie to help promote the film. PK, which released worldwide last year will experience one of the widest releases for an Indian film in China. It will hit over 3,500 screens.

The martial artist got a taste of Bollywood when he worked alongside Mallika Sherawat in The Myth, he is now ready to debut in Bollywood alongside Aamir Khan. According to Mid-day, Jackie is a a big fan of Aamir and is excited to have him on board for his new film. “I watch very few Bollywood movies. But I loved 3 Idiots, which was a big success in Hong Kong. I became Aamir Khan’s fan overnight. I am planning to shoot Kungfu Yoga in India this year.”

India’s national newspaper The Hindu, claims that co-production films will help Indian films gain access to China by circumventing a quota system for imported films. It is also expected to benefit Chinese films. Although no match for the success of Hollywood, Bollywood films have also gained popularity in China in recent years.

Alia, Jacqueline or Sonakshi? Who Dubsmashes like a boss?