The Gunner­s head north lookin­g to bounce back from their 1-0 Premie­r League defeat by Swanse­a
By AFP
Published: May 15, 2015
Tweet Email 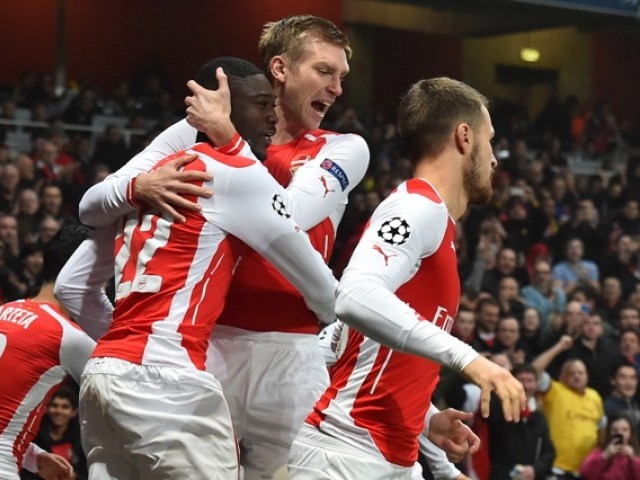 A file photo of Arsenal players celebrating a goal in a Premier League match. PHOTO: AFP

LONDON: Arsenal manager Arsene Wenger has challenged his side to make “make a symbolic statement” by winning away to Manchester United on Sunday and so secure their place in next season’s Champions League.

The Gunners head north looking to bounce back from their 1-0 Premier League defeat by Swansea on Monday and are aiming for a repeat of last month’s FA Cup quarter-final victory. A win this weekend would be Arsenal’s first in the league at Old Trafford since September 2006.

Arsenal are currently two points clear of United, with the upshot that if the London side avoid defeat on Sunday they will all but secure third place, with a win effectively condemning Louis van Gaal’s side to the lottery of the Champions League qualifying round.

“You expect a game of quality first and we want to bounce back from our defeat against Swansea by putting in a good performance straightaway, and getting a good result out of that,” Wenger said Friday.

“Any result will be a positive result. A draw or a win would be great for us,” added Wenger, who also said former United striker Danny Welbeck was set to miss Sunday’s match with a knee injury.

“First of all we can mathematically put a distance between them and us in the top four and basically secure the top three,” the veteran French manager explained.

“Also, we can make a symbolic statement because we won over there in the FA Cup, so to reproduce that would be psychologically important.

“Overall our recent away form has been very strong and that is always a sign of a team who is in progress.”

“It is not especially a message to anybody, (but) to do it again would convince us more that we have the strength and can be even stronger next season,” Wenger insisted.

“In the recent years it was a difficult ground for us and that is what we want to show, that we have made progress.”

During three of the past four seasons, Arsenal have had to go through the Champions League qualifiers and Wenger is determined they avoid the worry that comes with that, given the new domestic season will again start in August.

“It is very important for your season preparations to not have that kind of stress over your head from the first day you start again — it is vital,” he said.

“We know what it means and we know it is always tricky because you can play against teams who are in the middle of their championship when you are in preparation.

“The consequences are always dramatic if you don’t qualify,” said Wenger.