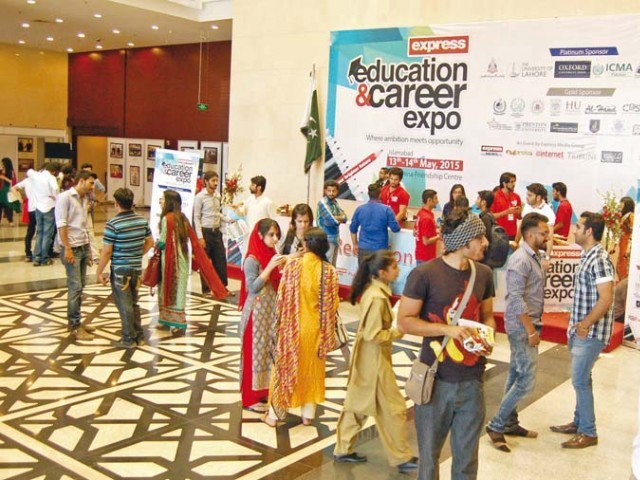 With a jam-packed venue on the last day, the two-day Express Education Expo 2015 which concluded on Thursday turned out to be a mixed bag of opportunities for students, universities and education consultants.

The event was organised by Express Group. It was the third in a row of education expos the group holds every year. Minister for Information Pervaiz Rasheed inaugurated the event on Wednesday. It attracted thousands of students and people from Rawalpindi and other cities. More than 20 institutes including HEC, the Oxford University Press, and Abasyn University, University of Lahore, British Council, Pakistan Testing Service, Islamabad Medical and Dental College and others also put up their stalls at the expo.

On the first floor, a hallway from the painting contest, the robotics group of the Centre for Advanced Studies in Engineering (CASE) displayed their footie-bots. Humayoun Shabbir was one of the 15 students of CASE who were displaying stunts of robots. “Yes it is indeed a forum to display our experiments we carried out successfully during our projects,” he said.

Akhtar Nazir was leading a group of 15 students from The Allied School Gujar Khan and showing them different stalls.

OUP stall was thronged by different students for mind games, brain teasers and such followed by gifts. A few stalls of old and new books were also set up with 20 to 50 per cent discount.

Similarly, the expo was a fun and a learning experience for Sidra Bukhari who had come to explore IT related programmes offered by the participating institutes. Dani Consultants, foreign education advisers, was also abuzz with students. “We received more than 700 visitors in two days and the most sought after subject for information is scholarship offers in engineering,” said Sajid Mehmood, one of the representatives at the stall. Among the most awaited contests was the fashion show. The winners were to be announced later in the evening with trophies and shields, like previous years.

In the dance competition, Comsats Abbotabad was the winner, followed by National University of Modern Languages and Bahria University Islamabad which stood second and third, respectively.

The expo was part of the series of education expos by Express Group held in Karachi and Lahore as well.