Cobbling dreams together: A different kind of stitch doctor

Cobbling dreams together: A different kind of stitch doctor 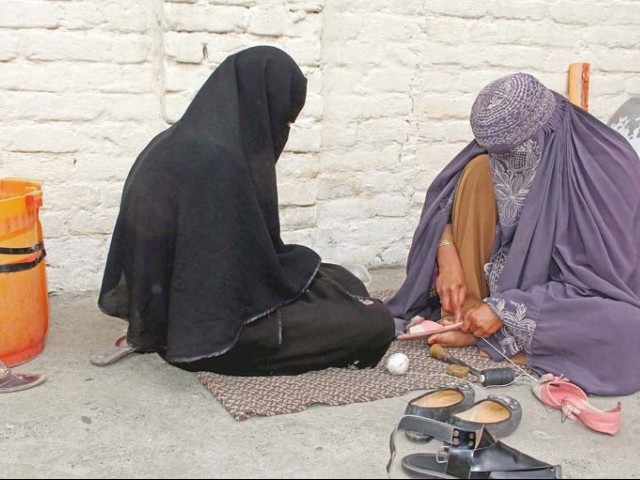 Even though 17-year-old Arifa’s* childhood dream of becoming a doctor could never come true, she never lost sight of her very grown-up responsibilities.

Arifa and her 44-year-old mother Khalida* scrape together a living mending shoes for their neighbours. Every morning, their one-room house in Qambar village, Mingora transforms into a makeshift cobbler’s shop. As the only women mending shoes in their village, both mother and daughter get business but work out of necessity rather than pleasure.

Arifa has two brothers and a sister who are of school-going age. One of her brothers suffers from thalassaemia while the other has been crippled ever since he was young.

The family has lived under the shadow of fear and is still trying to cast aside the haunting memories of a past it has left behind.

Many years ago, Arifa’s mother walked out on her husband, taking her four children with her from their life in another area of Mingora.

“My father had a substance abuse problem,” Arifa says. “After my parents were separated, my mother, with the help of my uncle, shifted us to the house we now live in. I was in grade nine back then.”

Arifa recalls the years she spent with her father, living in fear. “I had always dreamt of becoming a doctor,” she says. “But my father never wanted to educate me. He would beat me if I went to school and would then thrash my mother.”

According to Arifa, the opportunities she missed out on as a child hang as a heavy burden on her future. “Some of my classmates are now preparing to become teachers, nurses and doctors,” she explains, holding back tears.  “When I hear about them, my heart sinks and I feel as if I haven’t achieved anything.”

When the family moved to Qambar village, they had to face the harsh reality of making ends meet.

Adjusting to her new role as a single mother, Khalida was quick to become the backbone of the family in a dark phase of their lives. To earn a living, she learnt how to mend shoes and then taught the skill to Arifa.

“We now mend two or three pair of shoes every day,” Khalida says. “We get between Rs30 and Rs40 for each pair. On some days, we don’t earn a dime.”

Khalida says she never wanted to see her children suffer the way they did.

“I wanted all my children to get an education,” she says. “But things didn’t go as planned.”

However, she feels far from alone in her very daily, very real struggle to put food on the table. Even though it has become difficult to sustain the meagre income they earn every day, Khalida says she has received tremendous support from her neighbours. However, her fears continue to loom large.

“I am still scared of my husband,” she said. “He keeps threatening us and says he will sell Arifa.”

Tabassum Adnan, founder and chairperson of Khwendo Jirga, has identified the family’s plight and urged the relevant authorities to help Arifa go back to school.

Speaking to The Express Tribune, Ziauddin Yousafzai, the father of Nobel laureate Malala Yousafzai, has vowed to help Arifa resume her education.

“Arifa’s story is the story of every other girl in Pakistan,” he said. “We can make an individual effort to reach out to girls in that position and help them. However, the state has to prioritise the matter.”

He added, “We can’t bring prosperity to our country by helping only a few people. A proper system of social welfare needs to be put in place.”