FC soldie­rs recove­r a heavy cache of arms and ammuni­tion in the Lehri area of Zhob distri­ct
By Mohammad Zafar
Published: May 9, 2015
Tweet Email 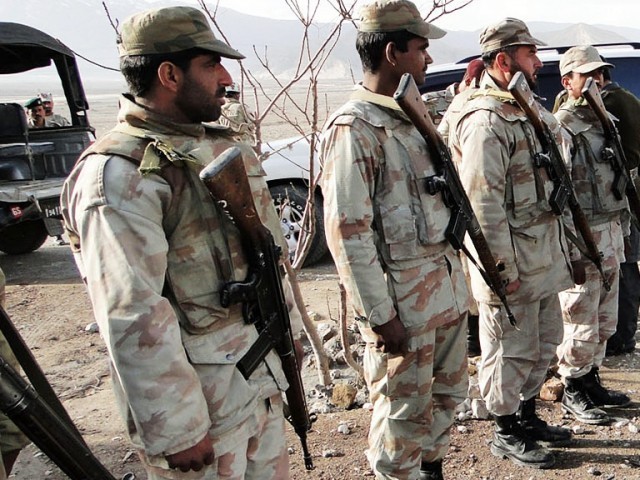 QUETTA: The Frontier Corps (FC) conducted multiple raids in different areas of Balochistan and arrested a number of suspected militants, including three members of the banned United Baloch Army (UBA).

The FC’s spokesperson told The Express Tribune that one of these raids was carried out in Mangochar area of Kalat district. “During the raid, FC personnel booked three militants of the banned UBA and shifted them to an undisclosed location for further investigation,” he said.

Elsewhere in Lehri area of Zhob district, the paramilitary force recovered a huge cache of arms and ammunition while arresting two suspected terrorists.

He said the force also defused 26 bombs on the spot. Meanwhile, the FC also captured four suspected militants from different parts of Sohbat district. “The FC launched a search operation at Goth Hamzani, Goth Doda, Tibba and adjacent area of grid and arrested four suspected persons, who are being investigated,” he said.

In another raid in Killi Thratta area of Pishin district, the law enforcing agency also arrested two suspected terrorists, who are being questioned.

The Frontier Corps also took into custody two Iranian citizens, who were trying to enter into Pakistani territory in Panjgur on Friday. “Both Iranians were trying to enter Pakistan without legal travel documents when FC soldiers spotted and arrested them,” said an official. Investigations are under way.

In K-P and Gilgit-Baltistan: Senators decry curbs on women voters