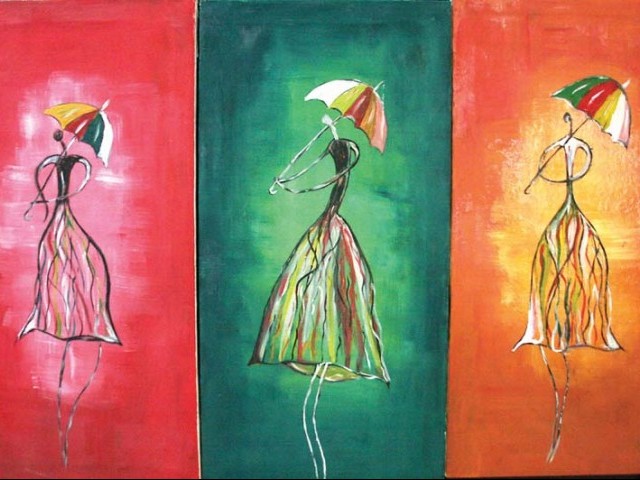 Work by a University of Education student on display at theses display show on Thursday. PHOTO: ABID NAWAZ/EXPRESS

LAHORE: Fine arts students from the University of Education, Lower Mall, are displaying their theses encompassing numerous social, political and personal issues. As many as 43 graduating students showcased sculptures and paintings, made mostly using oil on canvas.

Amna Noor, one of the students, said her work narrated Islamic stories such as the one of Prophet Musa (pbuh) when he had stood up to the Egyptian pharaoh.

She said she had used various symbols and calligraphic skills to discuss the work.

Azka Laraib’s work, titled Women Abstraction is about the existence of ordinary women. She says she has tried to delve into their thoughts in her work.

His paintings, showing various chairs and stationary thrown about in the aftermath of the attack, have a red background.

“I have tried to show the suffering and destruction caused by the event by using inanimate objects in my work.”

His work includes a sculpture where he has used red ink along with chairs to subtly depict the violence.

Vice Chancellor Faizul Hassan said this year thesis work was better than what he had seen over the past few years.

He commended the efforts of the students and said he hoped that the university would continue to produce such students and outstanding work in the coming days as well.

The exhibition will continue until Friday (today).