RAW formed to wipe Pakistan off the map of the world: Khawaja Asif

RAW formed to wipe Pakistan off the map of the world: Khawaja Asif 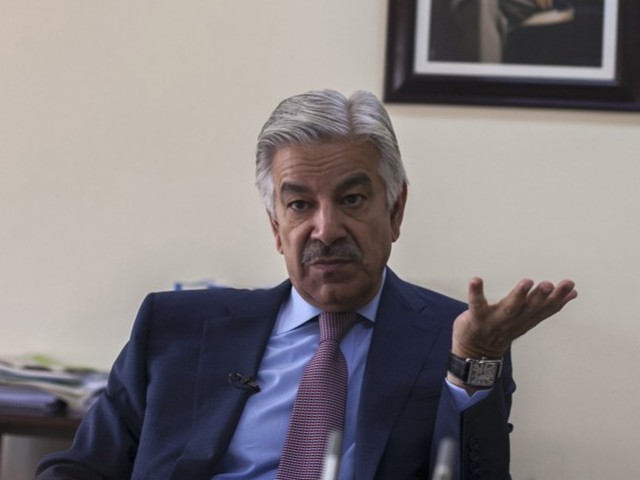 “RAW has been formed to undo Pakistan and to wipe Pakistan off the map of the world,” Asif said, during a television interview.

The defence minister’s statement came hours after the top military commanders accused India’s military spy agency, RAW, of fuelling terrorism in Pakistan in a rare public statement that may renew hostilities between the two hyphenated but hostile neighbours.

“The conference took serious notice of RAW’s involvement in whipping up terrorism in Pakistan,” said the military’s media wing, the ISPR, in a statement following a conference of the corps commanders presided over by army chief General Raheel Sharif at the military headquarters in Rawalpindi.

Read: Out in the open: Army accuses RAW of fuelling terror

This is the first time in recent years that the corps commanders have publicly alleged India’s hand behind the unrest in the country, although Islamabad has long suspected RAW’s involvement.

Prime Minister Nawaz Sharif made improving ties with India a priority when he won a 2013 election. However, late last month, PM Nawaz accused India of failing to respond to Pakistan’s desire for good relations.

India was angered earlier in April when a Pakistani court freed on bail Zakiur Rehman Lakhvi, accused of plotting a 2008 assault on the city of Mumbai in which 166 people were killed.

The statement followed the arrest of  arrested two ‘Muttahida Qaumi Movement workers’ for allegedly inciting violence in the metropolitan city at the behest of RAW. The controversy has led to a verbal duel between MQM chief Altaf Hussain and the security establishment.

Altaf launched scathing criticism against the military establishment in what was seen as frustration on the part of the self-exiled MQM leader over the ongoing targeted operation in Karachi. Subsequently, the army said it would pursue legal action against Altaf for his unsavoury remarks.

Though the MQM chief aplogised for what he called sarcastic remarks, Defence Secretary Lt Gen (retd) Mohammad Alam Khattak told the National Assembly Standing Committee on Defence on Tuesday that legal action would be taken against Altaf irrespective. The committee chairman, Sheikh Rohail Asghar, also supported action against Altaf for his disparaging remarks against the army.

The MQM chief, in his televised speech, had urged the army to stop alleged discrimination against ‘Mohajirs and poor people’ of Karachi – a reference to the surgical operation in the volatile metropolis.

But Tuesday’s corps commanders meeting quashed this impression with the army chief making it clear that the Karachi operation was not against a particular party or group. “The surge against terrorists and criminals is apolitical, across the board and focused to achieve peace in the country,” the ISPR quoted Gen Raheel as saying.

The army chief, while addressing the conference, said, “A terror-free Pakistan is now a national resolve.” Lamenting the deaths of thousands of innocent Pakistanis, including children, at the hands of terrorists, Gen Raheel said, “Law enforcement agencies and our brave armed forces have given a lot of sacrifices in fighting these misguided and hardened criminals to safeguard a peaceful and better future for our next generation.”