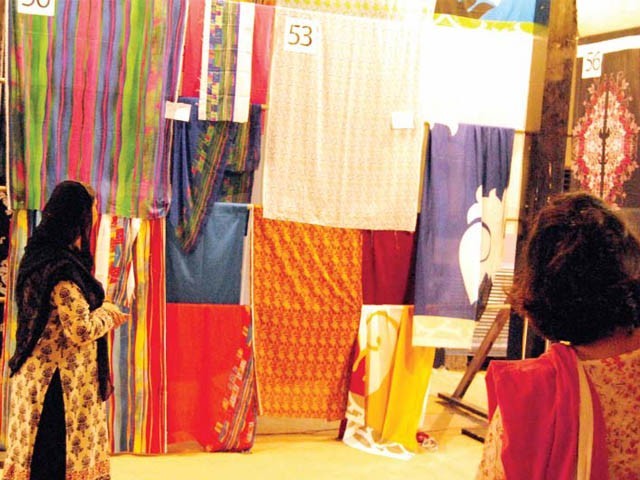 With a declining trend of wearing dupattas, older women have become the major customers of the vanishing accessory. PHOTO: EXPRESS

KARACHI: The famous Dupatta Gali of Tariq Road, that once had eight to ten shops specialising in the sales of dopattas, is now left with only three shops. With colourful dupattas featuring a variety of designs, pieces from Bahawalpur and Multan dominate the customer demand.

What sets these dupattas apart is the needlework. Some of the most popular embroideries embellishing these dupattas include shadow work, mirror work, bead stitch, simple satin stitch, running stitch and Sindhi stitch. The fabrics usually used in their making include cotton, georgette, chiffon and lawn.

According to Abdul Rahman of Shamsi Palace, a shop located in Dupatta Gali, “These dupattas first started being made in Bahawalpur about 25 years ago, with Multan being the hub from where they used to be sold off to various cities of the country.”

Ali Asghar, a shop assistant at Hijab-ul-Haya, said, “These dupattas come primarily from Bahawalpur. In Karachi, it’s the middlemen who bring in these dupattas in Bolton’s wholesale market. From there, the shopkeepers of Tariq Road collect the pieces ready to be sold to the customers.”

Asghar further informed, “The makers of these dupattas are underprivileged women of the villages, who hardly get Rs50 for each piece they work on. 10 to 20 pieces reach a single home and it takes about three days to finish working on a single dupatta.”

On an average, the prices of Multani and Bahawalpuri dupattas range from Rs180 to Rs700 a piece. Compared to the wage rate of Rs50 a piece, the product provides a fair share for the middlemen.

“It is in Dera Nawab and a couple of other small villages near Bahawalpur where these dupattas are made,” added Rahman.

Rahman, however, holds a different opinion, “They are still in demand with the older generation of women and this product still goes to the Gulf regions, India, UK and US.”