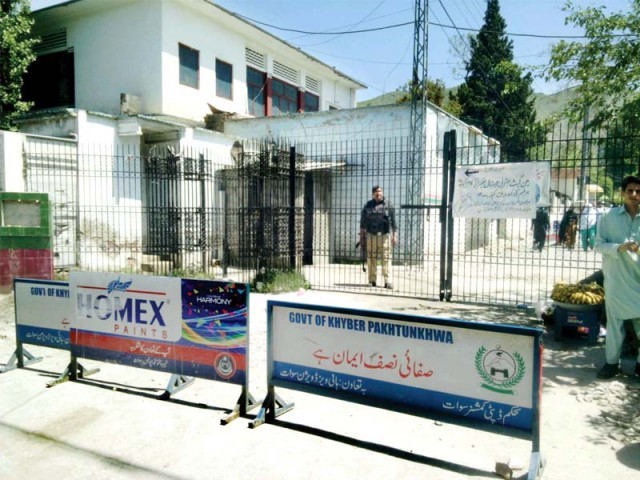 MINGORA: Walking from pillar to post with his unconscious son in his lap, Ismail awaits anxiously for a CT scan report. The boy fell from a roof and his father did the sensible thing by bringing him to Swat’s largest medical facility; or perhaps not.

He had to wait three hours for the report and was then told to consult a radiologist at a private hospital as there was none available at Saidu Teaching Hospital (STH). The labourer had to borrow from relatives to pay Rs1,500 for the CT scan and now has to think of ways to come up with the cash for private consultancy.

In fact, those turning to Saidu Teaching Hospital in Swat for something as simple as an x-ray will be sent back with little or no help. Despite its size, STH is badly mismanaged and unable to provide some of the most basic medical facilities. As a result, patients and attendants alike are asking the government to put matters straight.

Established in 1927, the hospital is the fifth largest in Khyber-Pakhtunkhwa. It was declared a teaching hospital in September 2000 for students of Saidu Medical College. The 500-bed facility operates out of two wings located about 1.5 kilometres apart and caters to the medical needs of people from all seven districts of Malakand Division.

Patients and their attendants in the hospital complain about the lack of every facility in one of the province’s largest hospitals. The x-ray and MRI machines have not been operating for the last one month, patients claim. “This is the second time in a month I have come to find the x-ray machine out of order,” says Ismail Baber, a resident of Saidu Sharif. “As a result, I had to get an x-ray from a private laboratory.”

Others have complained about the hostile attitude of staff and exorbitant charges for a CT scan.

Youngsters seeking medical clearance certificates for their driving licences are sent from one end to another. “I am a citizen of this country, not a foreigner. Yet they play me like a football, sending me from here to there,” complains Mohsin Ali from Amankot. “We have no idea where to turn to.”

Many patients and attendants also complained that senior doctors remain absent on Sundays, while the hospital is handed over to young students of Saidu Medical College in the afternoon.

Alone in the dark

Apart from being dirty, the wards are also unsafe, especially at night. “A burglar tried to snatch my earrings when I was sleeping. Luckily I woke up and he ran away,” says Rukhsana who was attending to her daughter at the surgical ward at the time.

The weight of the world

Perhaps one of the greatest problems is the fact that the main gates of the hospitals are closed due to some repair work. This forces families to physically carry their patients about 300 yards from the road to the casualty unit for emergency treatment.

Acting medical superintendent Dr Ayub tells The Express Tribune that the MRI machine has been shut down due to a gas shortage, while a letter has been sent to the engineering unit in Batkhela to repair the x-ray unit. Talking about the main entrance, he says it has been closed to complete construction and will be open once work is finished.

Malakand Division Commissioner Kifayatullah Khan claims he has taken notice of the mismanagement and slow repair work. “I personally visited the hospital and have warned the contractor to complete work within three days and open the gates,” he adds.