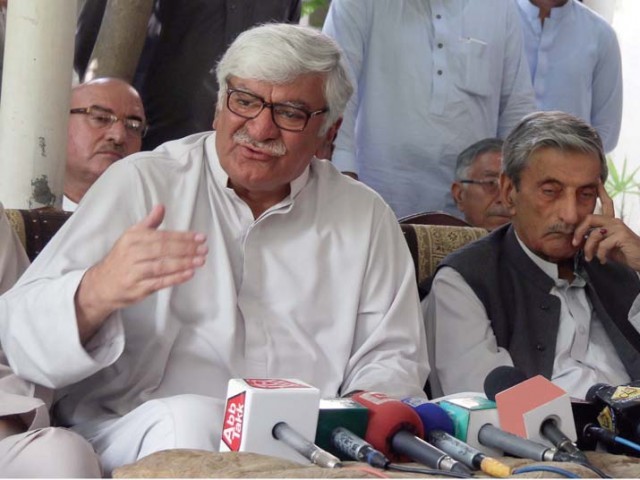 Awami National Party has decided to call an all-parties conference (APC) in Balochistan to oppose the proposed change in the China-Pak Economic Corridor.

Party chief Asfandyar Wali Khan told the media at Bilour House in the city on Sunday that ANP General Secretary Mian Iftikhar Hussain has been told to visit Balochistan and discuss holding of an APC with political forces.

Asfandyar said ANP’s think tank was happy over the Chinese president’s visit to Pakistan as bilateral relations were important for the region. Referring to the route change, he said it would be useful for both the government and the nation as a whole if all political forces sat down to discuss matters. “It is not proper that the government makes a decision [on its own] and then says it is final.”

He advised the government to learn a lesson from China which is investing billions of dollars on the economic corridor to develop areas of its country which are affected by militancy.

“A change in the route will heighten the sense of deprivation in already struggling areas which are affected by militancy and are ignored in development schemes.”

The original route passed through the Baloch and Pukhtun belt, both badly hit by militancy. “If a person in Zhob knows that the corridor is passing through his or her area, it would ease their sense of deprivation.” Asfandyar said any sensible person will not welcome the change in the route.

The ANP chief said Fata, which has been considered nothing more than a ‘space’, was not included in the corridor. “The word Fata cannot be seen anywhere in the document.”

Asfandyar said there was time for the government to call a meeting and discuss the important issue with concerned political leaderships. “ANP has asked its district-level leaders and office bearers to start mobilising across the country and act on the decisions which would come after the APC in Balochistan.”

He said change in route would see Punjab reaping 70% of the benefits of trade along the corridor, while the rest of the provinces will share the remainder along with Gilgit-Baltistan.

However, the ANP chief added, “We are like four brothers and want to live that way,” Asfandyar said while referring to the provinces. “We are happy Punjab is making progress and hope that this continues.”

To a question on cooperation with the ruling Pakistan Tehreek-e-Insaf—which is also concerned over the proposed route change— Asfandyar said his party is willing to accept any negotiations that would put pressure on the PML-N-led federal government.

No honour in killing: Couple shot dead for eloping