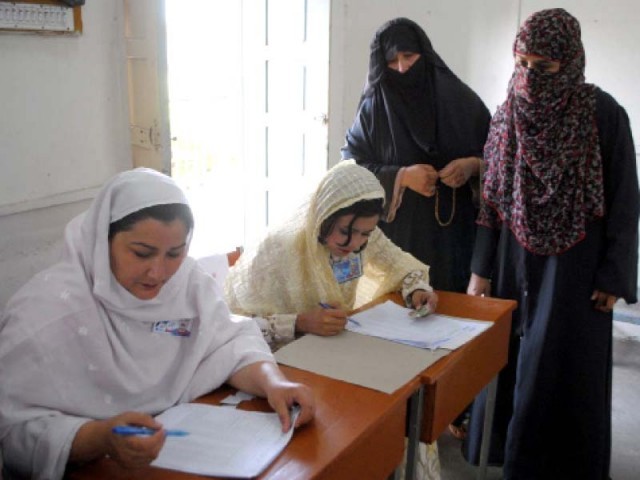 Voters check their names in polling lists during cantonment board elections in Peshawar. PHOTO: PPI

Ending a 17-year wait, cantonment polls were conducted across Khyber-Pakhtunkhwa on Saturday. Manned by security forces and police officers, no polling station in the province’s 11 cantonments witnessed any major untoward incident as voting continued smoothly between 8am and 5pm.

In a curtain raiser to the local government polls on May 30, 149 candidates and their supporters pushed for a win as the province’s leading political fronts flexed their muscles in 28 wards out of 32 across the cantonments.

Voter turnout across the province was mostly low; a stark contrast to enthusiasm shown by candidates. Owing to security protocols and a general lack of awareness, statistics collected from participants suggest a mere 40% registered voters turned up to cast the ballot across K-P.

Exit polls in Peshawar, where 43 candidates were battling it out in five wards, suggest Pakistan Tehreek-e-Insaf secured two seats while the remaining three have been won by Pakistan Peoples Party, Jamaat-e-Islami and an independent candidate. Turnout in the city was gauged at 30% approximately by polling agents.

The Express Tribune learnt only 480 out of 1,254 women exercised their right to vote at the FG Girls Degree College women’s polling station in the provincial capital. Retuning Officer Saleem Hassan Watoo said mobile phones and cameras were not allowed inside polling booths and parties were not permitted to set up camps near the stations.

Talking to The Express Tribune, he said the polling process moved at a snail’s pace. Yousaf accused parties of “buying out” voters in some wards. He accused the Awami National Party of violating guidelines set by the Election Commission of Pakistan. Yousaf said the ECP had prohibited the transportation of voters to polling stations by political parties but ANP turned a blind eye to the ruling.

The number of registered voters in Nowshera cantt is 15,680 and preliminary reports suggest a healthy voter turnout was witnessed in the district.

As many as 23 candidates participated in the polls, with PTI and ANP fielding candidates in all four wards. Extraordinary security arrangements were made at the constituency’s five polling stations and even the media was not allowed access, despite the issuance of permits.

Similarly, a high voter turnout was seen in Risalpur’s three wards as 11 candidates put their luck to test.

No polling activity was carried out in Cherat cantonment as independent candidates Amir Hussain and Farooq were both elected unopposed in the respective wards.

Ballots were cast for nine seats which were contested by 39 candidates across the three cantonment boards – Abbottabad, Havelian and Murree Gallies – of the district.

Apart from minor confrontation between opponents, the polling process remained peaceful and orderly at large. Turnout remained poor in the morning and afternoon but picked up pace towards the closing hours. Educational institutions remained closed in all cantonment areas.

The media was initially barred from entering stations but was later granted permission.

Cantonment Board Abbottabad CEO Malik Omar Farooq said a PML-N candidate filed a complaint against Minister for Information Mushtaq Ahmed Ghani for “influencing voters”, adding the complaint will be investigated.

Police had set up a special control room to monitor the balloting process in Kohat cantonment. Security officials and police personnel were deployed across polling stations and the routes leading to these centres.

Amidst a host of security measures, parking of vehicles was permitted at least 200 meters away from the polling stations. The Kohat DPO also visited the stations numerous times to oversee the arrangements.

A high voter turnout was seen in Bannu cantonment as eight candidates competed for two wards. Several voters were turned back for carrying invalid identity documents.