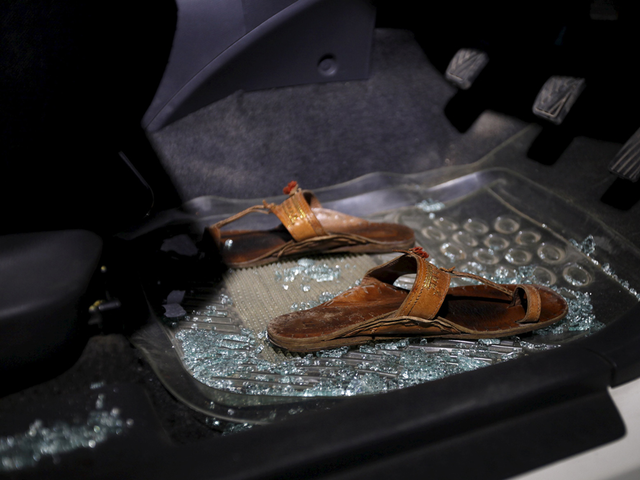 KARACHI: Sabeen Mahmud, the director and founder of The Second Floor (T2F) cafe, was shot dead in an act of target killing Friday night in Karachi.

Sabeen hosted a session at T2F titled ‘Unsilencing Balochistan (Take 2)’ on Friday evening, featuring the chairperson of Voice for Missing Baloch Persons (VBMP), Mama Qadeer. This was the same session which was due to be held at LUMS a few weeks ago, but was cancelled at the last minute.

Following the brutal attack, an FIR was registered at Defence Police Station under sections 302 (murder), 324 (attempted murder) and 7 under the Anti-Terrorism Act.

The case was registered on behalf of Sabeen’s mother, who was critically wounded in the attack and is admitted in hospital.

Sabeen, along with her mother, left the premises of T2F nearly an hour after the session had ended, around 9pm. Travelling in a white Suzuki Swift, they reached the Defence Central Library traffic signal when armed motorcyclists intercepted them from both sides and opened fire. Sabeen was shot four times and died on the spot, while her mother was shot twice.

They were rushed to the hospital, where Sabeen was pronounced dead. Her mother was shifted to the Aga Khan University Hospital for treatment.

Inquiry officer Muhammad Arshad confirmed to The Express Tribune that the attack on Sabeen was an act of target killing, adding that the police were investigating the case from various angles to ascertain the motive behind the incident.

Having ruled out robbery, sources have said investigators are trying to determine the motive of the killing through various angels.
Further, they also said that Sabeen’s name, along with the names of some journalists, was included in a hit-lift combined by militants, which was released by intelligence agencies in January.

They added that Sabeen had been receiving threats since the past six months, with the most recent one on April 22.

Her driver Ghulam Abbas told the police that at least four suspects in a white car were following their car, while armed motorcyclists opened fire on Sabeen.

Reports say a 9mm pistol was used in the incident.

A large crowd of family, friends and well-wishers gathered outside the Jinnah Postgraduate and Medical Centre (JPMC) mortuary where Sabeen’s body had been brought for a post-mortem.

JPMC’s joint executive director Dr Seemin Jamali said that Sabeen’s postmortem was carried out at the hospital’s mortuary. According to the post-mortem, Sabeen was shot twice in the chest and received one bullet each in the face and neck. Doctors said that the cause of death was the bullet she received in her neck.

Law enforcers reached the site of the attack to collect evidence.

Officials said they had recovered empty shells of bullets fired in the assassination.

“We are checking to see if there are CCTVs installed near the incident,” Inquiry officer Muhammad Arshad said, adding that they wanted to determine whether the assailants were following her or were waiting at a particular location.

Arshad said that that Sabeen had been receiving threats and that the police were trying to access her cell phone records.

Leaders of various political parties, including MQM chief Altaf Hussain condemned the attack and demanded that the culprits be brought to book.

Prime Minister Nawaz Sharif too has extended condolences to the bereaved family of Sabeen. He has also asked concerned authorities to thoroughly investigate the incident and submit report to him.

A Pakistan Tehreek-e-Insaf MNA, speaking to the media outside the mortuary, revealed that Sabeen had been receiving threats since the past few days. “She was running a movement for the missing persons and had been receiving threats,” he said. “It is tragic that a woman of Sabeen’s stature, who was speaking out for human rights and for an end to terrorism, was killed so mercilessly.”

Sindh Chief Minister Syed Qaim Ali Shah has also sought a report from IGP Sindh over the incident and ordered the police to arrest the assailants. On Saturday, Shah directed the concerned authorities to constitute a judicial commission to probe the target killing of T2F director Sabeen Mahmud. According to the CM’s spokesperson, directives have been issued to Home Department to issue a notification of the commission without any delay.

Acting President Mian Raza Rabbani, while strongly condemning the target killing of Sabeen Mahmud, said that Karachi had lost one of its greatest assets.

Terming it an attack on freedom of speech and expression, Rabbani directed Chief Minister Sindh to submit a report on the brutal murder immediately and to arrest those responsible within 72 hours.

The Acting President also directed the authorities concerned to ensure the provision of best medical treatment to Sabeen’s mother who was injured in the attack.

Former president Asif Ali Zardari too condemned the brutal targeted assassination and called for the arrest and punishment for the attackers.

Zardari’s spokesperson, quoting the former president, added that the timing and location of the crime scene and the issues Sabeen was known to advocate raise questions about the motives behind this seemingly targeted assassination and it needs to be probed.

Meanwhile, an investigation team headed by south zone police chief DIG Dr Jameel Ahmed has been constituted to probe Sabeen’s murder. SSP South Tariq Dharejo and SSP Investigations Faizullah Korejo have also been included in the team, which has been tasked to submit its initial report within three days.

Police have also detained Sabeen’s driver Ghulam Abbas for questioning. Abbas is a constable with the Excise Police and used to work as a part time driver.

Talking to The Express Tribune, Mama Qadeer condemned the attack and that Sabeen and her mother departed from the venue shortly after the event had ended.

“The programme went really well and the response was great. Once the event ended, we stayed back at the venue for a bit. Sabeen then told us that she was going to leave since her house was far,” said Qadeer.

“Shortly after Sabeen left, we heard gunshots,” he added.

Qadeer said the event was initially supposed to be held on April 21 at a different location, but the venue was later changed after the organisers started receiving threats. The car Sabeen Mahmud was in when she was attacked. PHOTO: MOHAMMAD NOMAN/EXPRESS

Fellow panelist for Friday’s event, Muhammad Ali Talpur said that they had lost an honest and dedicated friend.

In @sabeen We have Lost an Honest & Dedicated Friend. Baloch will Remain Indebted to her. Remember her Compassion. pic.twitter.com/wewodNMEd0

As @sabeen was Leaving with her Mother. I thanked her & her Mother said, "One has to stand up for what we believe in" pic.twitter.com/aQZPCjEZV9

As news about the attack spread, many who knew Sabeen expressed their shock and grief.

Please God save us all . This is frightening horrifying news. Sabeen Mahmud.

Tonight before the talk on #Balochistan Sabeen said while smilinf, "thankfullt we have not been told by anyone to not hold this talk".

Two summers ago in london i told @sabeen to be careful and she said, 'someone has to fight.' Goodbye, my friend. You were the best of us.

“I felt so hopeless about this country, and then when I started meeting people here we got strength from each other" Sabeen Mahmud.

What sort of a monster would do that to her? She never hurt anyone. Why?

Oh my God. I saw her moderate this session. #UnsilencingBalochistan

Where is the protest , where is the vigil for # SabeenMahmud ? She stood for everyone voiceless.now we must stand

After the horrific attack that left Sabeen dead, a special last-minute panel is going to be held at Islamabad Literature Festival today (Saturday) at 3:30pm in her memory.

The panel will be held by Pakistani author Mohammad Hanif, writer Shandana Minhas and Dr Framji Minwalla, Assistant Professor and Chairperson of the Social Sciences & Liberal Arts department of the Institute of Business Administration (IBA).