It was oozing glamou­r in West London at the UK premie­re of Avenge­rs: Age of Ultron­
By Umnia Shahid
Published: April 24, 2015
Tweet Email 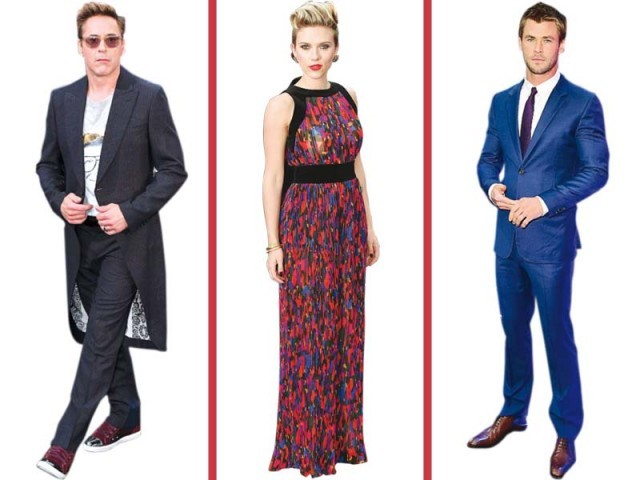 KARACHI: It was oozing glamour in West London at the UK premiere of Avengers: Age of Ultron. Scarlett Johansson was joined by her A-list co-stars Robert Downey Jr and Chris Hemsworth at the screening of the action-hero film at Westfield London shopping mall. Here’s a round-up of their looks. The actor covered up her figure in a multi-coloured sleeveless Balmain jumpsuit. The striking blonde wowed in the wide-legged outfit from the brand’s autumn/winter 2015 collection, which featured an embedded waist-whittling black girdle. With her short hair styled in an edgy updo teamed with a bold red lip, the ‘Black Widow’ looked every inch of stunning. The Iron Man star teamed his quirky casual t-shirt, featuring an image of Bill Gates, with a statement-making long-tailed charcoal pinstripe coat and matching trousers, as he greeted thousands of fans at the extravagant premiere. Channelling his playful style, the magnetic actor rocked his signature shades, and a pair of slightly-more-formal burgundy-and-black plimsolls. The Thor sensation looked remarkably handsome in a well-fitted crisp blue suit. He partnered his radiant sapphire suit with a polished white shirt and a dazzling periwinkle-purple silk tie. Refining his look, the Australian heartthrob donned formal tan-brown leather lace-up shoes and sported stubble to add oomph to his ensemble.

In need of greener pastures