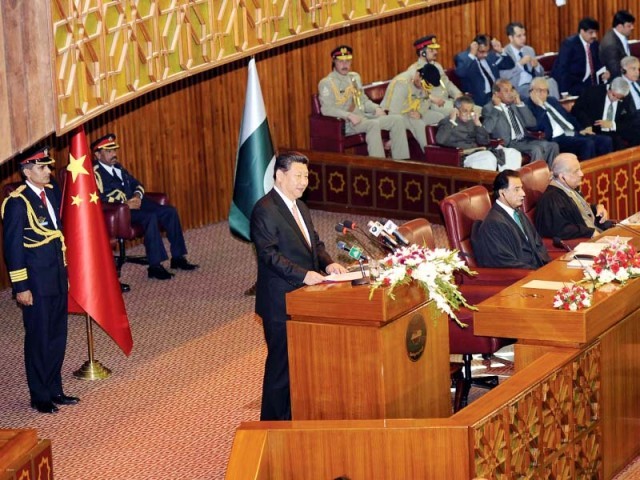 Chinese President Xi Jinping said on Tuesday that Pakistan is a defensive bulwark for the security and stability of his country’s western borders, and Islamabad’s uncountable efforts and sacrifices in the war against terror are worthy of praise.

“In the new century, Pakistan stands at the forefront in the war on terror… has endured enormous sacrifices in enforcing peace and stability in the region and the world at large and Chinese people will always stand together with dependable Pakistani friends,” President Xi said as he wrapped up his two-day official visit to Islamabad.

The Chinese leader was addressing the joint session of parliament – the first Chinese head of state to do so in Pakistan and the first dignitary given that honour by the incumbent parliament.

In his 36-minute speech which started and ended with a standing ovation by MPs, President Xi acknowledged Islamabad’s efforts for security and stability of Beijing’s western borders.

“Pakistan has played a pivotal role in addressing issues in areas of China’s western borders and we cannot forget that,” Xi said as he counted Pakistan among the first countries to recognise China and the first Muslim country to enter into diplomatic relations with it.

Xi Jinping said Pakistan is a great country. “Its people are kind, brave and dignified in character. Over the past sixty years, Pakistan – in the face of many domestic and international problems – has risen to the challenges and upheld its sovereignty, territorial integrity as well as achieved significant national and economic development,” he said.

Admiring the prime minister’s vision to make Pakistan the Asian tiger, he said Pakistan today has a historic development opportunity and hoped that it will achieve the desired goal. “The Chinese people will stand by the Pakistani people in this great endeavour,” he added.

Pakistan and China have a shared destiny and both will work together to create a bright future for the peoples of the two countries. “During talks with the prime minister, we have agreed to further elevate the all-weather strategic partnership. By this, we mean that we will move together in rain and sunshine,” he added.

The Chinese president said both the countries should support each other on their core interests and be the most reliable partners. He said China firmly backs Pakistan’s efforts to safeguard its sovereignty, independence and territorial integrity.

Xi acknowledged that Pakistan has always come forward with selfless and valuable assistance whenever China was hit by difficult times. Similarly, he said, China has also come for Pakistan’s help, whenever needed.

Presenting a future roadmap for building a more robust strategic partnership, he said both the countries need to work together to strengthen their friendship and economic relations.

Xi said China believes in common development and it will take along Pakistan in this path of development. “China-Pakistan economic corridor project will bring prosperity in all parts of Pakistan and the region,” he added.

He said both the friendly countries should maintain strategic communication on regional and international issues, adding that China supports Pakistan’s constructive role in Afghanistan.

He said China is a peace loving country and wants to promote relations with all the South Asian countries. “The Silk route project is a significant move on the part of China to fully open up,” he said.

PM’s vote of thanks

In his vote of thanks, Prime Minister Nawaz Sharif termed President Xi’s address ‘a historic moment’ and said Pakistan and China are friends forever, in difficult and happy moments alike. “We are good neighbours, close friends, dear brothers, and trusted partners.  We have an all-weather, time-tested cooperative strategic partnership.  We are truly iron brothers,” he said.

He thanked President Xi for his “inspiring’ address, solidarity with the people of Pakistan, and valuable insights on how the two nations should move forward to seize new opportunities and overcome challenges”.

Nawaz said China-Pakistan economic corridor is a product of the joint endeavours of the two countries at the conceptual and operational levels. “It has moved fast into the implementation phase. It will benefit the entire country and all the provinces,” he said. He said the corridor is the critical connective plank of ‘One Belt-One Road’. “It symbolises our determination to create win-win partnerships, which threaten none, but benefit all,” he added.

The president decorated Chinese president for his outstanding services toward further cementing bilateral cooperation between the two countries.