Social media users, includ­ing many from India, have latche­d on to name as a form of commen­tary on Sino-Pak relati­ons
By AFP
Published: April 21, 2015
Tweet Email 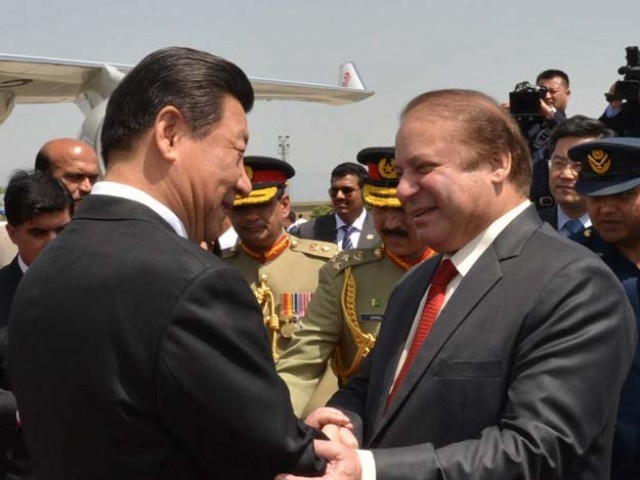 ISLAMABAD: Chinese President Xi Jinping’s two-day visit to Pakistan has been replete with flowery rhetoric extolling mutual love between both countries, but the name chosen for a new joint think tank has left some social media users in titters.

Dedicated to research on the China-Pakistan Economic Corridor, a $46 billion dollar plan linking China’s restive west to the Arabian Sea, the newly inaugurated Research and Development International (RANDI) organisation has been widely pilloried because its acronym sounds like “whore” in Urdu and Hindi.

Social media users, including many from India — Islamabad and Beijing’s historic rival — have latched on to name as a form of commentary on Sino-Pak relations, saying the South Asian country has now been ‘bought’ by China.

“Well, that’s an unfortunate name for a think tank…” tweeted Fatima Bhutto, a writer and political activist, in one of the more understated responses.

According to a press release, the think tank will be co-headed by Madame Zhao Baige, a member of China’s parliament, and Mushahid Hussain, a Pakistani opposition senator.

“The new think tank is the first joint initiative of China and Pakistan which will be dedicated to research on the China-Pakistan Economic Corridor,” said Mushahid, who added it was associated with the prestigious Tsinghua University.

The economic corridor will create a network of roads, railways and pipelines linking China’s restive west to the Arabian Sea through Pakistan as part of Beijing’s plans to expand its trade and transport footprint across Central and South Asia.

The project dwarfs previous efforts to assist Pakistan’s underperforming economy, but analysts have cautioned that the lion’s share of the returns would likely go to China.

Some of the tweets mocking the name can be viewed here:

Can anyone plz tell me #RANDI stands for….???

Hilarious, they even can't think of better abbreviations.. LMAO #RANDI

That LOL moment when you read China and Pakistan's collaborative think tank is called #RANDI! Late to the party but did have a good laugh