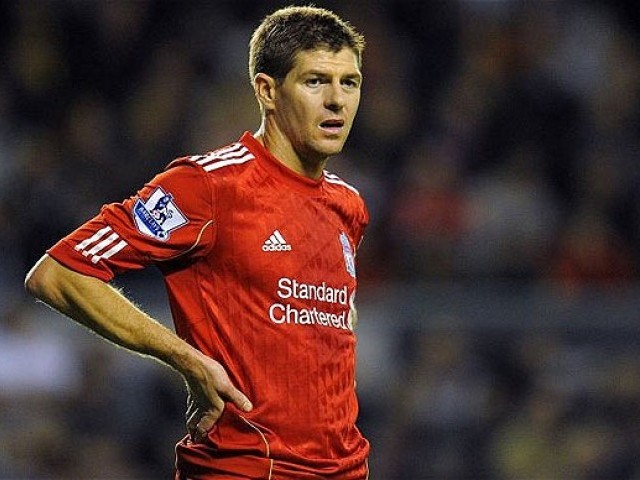 LONDON: Steven Gerrard is gunning to lead Liverpool against fellow Premier League side Aston Villa in an FA Cup semi-final at London’s Wembley Stadium on Sunday.

The Reds captain, in his final season, with the Anfield club, is available after missing Liverpool’s last three matches through suspension, having been sent off for stamping on Ander Herrera during a 2-1 league defeat at home to bitter rivals Manchester United on March 22.

But now the question is how Liverpool manager Brendan Rodgers will deploy veteran midfielder Gerrard.

Liverpool native Gerrard has been a one-club man in his 17-year professional career so far, but he is set to bring down the curtain on his time at Anfield come the end of the season when he joins Major League Soccer’s Los Angeles Galaxy.

For Liverpool fans, the fairytale finish would see former England captain Gerrard lifting the FA Cup in a Wembley final on May 30 — his 35th birthday.

Reds’ staff organised a behind-closed-doors friendly on Monday to help assess Gerrard’s fitness but Rodgers was in no doubt he could feature against Villa.

“Steven is definitely ready. We had a game here on Monday that he played in,” said Rodgers.

“He’s a special footballer. He has always produced big goals and big moments. The most important thing is having him back for Sunday,” the Northern Irishman added.

Liverpool also have a chance of finishing in the top four and qualifying for next season’s Champions League but goalkeeper Simon Mignolet said they shouldn’t have to decide between dreams of Europe or FA Cup success.

“The next game is the FA Cup semi-final so the focus is on that but you don’t really choose between your mum and dad so we still have two things to play for and we will try to do that from now until the end of the season,” Mignolet said.

“We want to do both — let’s hope we can do both. We have the FA Cup and league still to play for and we want to do well in every single game.”

Both Liverpool and Villa have won the FA Cup seven times, but whereas the Reds most recent success was in 2006, you have to go back to 1957 for the last of the Birmingham club’s Cup triumphs.

This has been a gruelling season for Villa, who sacked manager Paul Lambert and brought in Tim Sherwood but are currently just six points above the bottom three and still not safe from relegation
However, they head into Sunday’s match with key striker Christian Benteke, a Belgium team-mate of Mignolet, on a run of nine goals in his last eight games for club and country, including he winner in last week’s 1-0 victory over Tottenham Hotspur.

“I still think I can do more, in everything. I can’t say I’m happy to be there now, I want to do more and more and more,” said Benteke, who ruptured his Achilles 12 months ago.

He added everyone connected with the club was desperate their Cup adventure didn’t end on Sunday.

“I think when you play a semi-final you want to get to the end. You can’t say you’re just happy to be there even if you lose, you want to go until the end.”

Sunday’s winners will play either Arsenal, currently second in the Premier League or Championship side Reading, who meet at Wembley on Saturday, in the final.