Imams chant slogan­s in favour of the commun­ist Party, forced to tell childr­en prayer is harmfu­l for the soul
By Web Desk
Published: April 18, 2015
Tweet Email 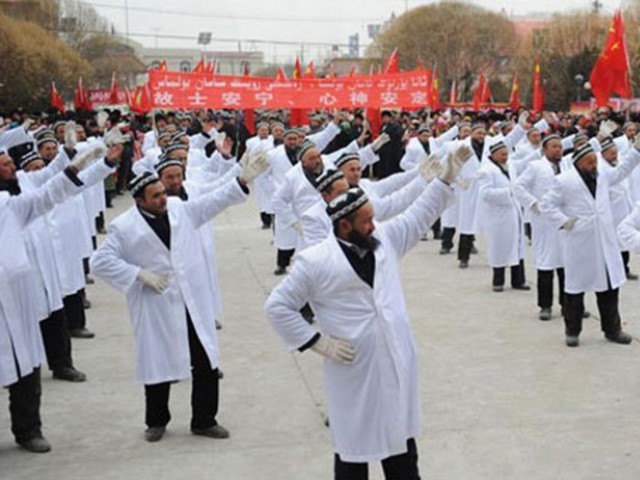 The imams were also forced to tell children that prayer was harmful for the soul. PHOTO: ON ISLAM

XINJIANG: In another attempt to suppress religious freedoms, China forced imams from its eastern Muslim majority Xinjiang region to dance in the street and swear to an oath that they would not teach religion to children.

The imams were also forced to tell children that prayer was harmful for the soul.

The Muslim imams were further forced to brandish the slogan that “our income comes from the CKP [Chinese Communist Party] not from Allah”.

Read: The Muslims of Xi’an, China

State Chinese news said the imams were gathering in a square in the name of civilization where they were forced to dance and chant out slogans in support of the state.

The slogans included statements glorifying the state over religion such as ‘peace of the country gives peace to the soul’.

Speeches were also given which directed youth to stay away from mosques and that prayer was harmful for their health. They were instead encouraged to dance.

Uighur Muslims are a Turkish-speaking minority of eight million in the northwestern Xinjiang region.

Also known as East Turkestan, the region has been autonomous since 1955 but continues to be the subject of massive security crackdowns by Chinese authorities.

Rights groups accuse Chinese authorities of religious repression against Uighur Muslims in Xinjiang in the name of counter terrorism.

In August, the northern Xinjiang city of Karamay prohibited young men with beards and women in burqas or hijabs from boarding public buses.

Similarly, Xinjiang banned the practicing of religion in government buildings, as well as wearing clothes or logos associated with religious extremism, last November.

Last year, China banned Muslim students and government staff from observing fasts in the month of Ramadan, while encouraging locals to abstain from wearing veils.

Shocked by the outrageous incident, many took to social media to express their views.

Do we know That ! #China has forced the imams of eastern Muslim majority district of Xinjiang to dance in the… http://t.co/08x1ZhTcat

Muslim Imams are forced to Dance On Streets And Swear Not To Preach Islam by China http://t.co/qpniTQJLOj pic.twitter.com/90hHGRaLPJ

This article originally appeared on OnIslam

The wonders of Islamic architecture