While author­ities say Wani was shot dead in gun battle with Indian forces, his father said he was tortur­ed to death
By AFP
Published: April 14, 2015
Tweet Email 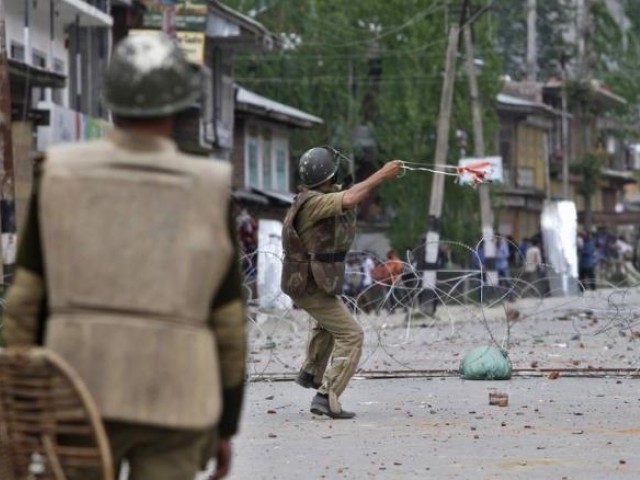 SRINAGAR, INDIA: Hundreds of protesters clashed with riot police in Indian Kashmir on Tuesday after the brother of a separatist leader was killed by government forces.

While authorities in the disputed region said Khalid Wani was shot dead in a gun battle with Indian troops in a forest, his father said the 24-year-old had been tortured to death.

Military spokesperson N N Joshi said that Wani was killed on Monday in Buchoo, a forested area around 50 kilometres south of the main city of Srinagar, during a search operation by the army.

“The terrorists were effectively engaged and one terrorist was eliminated,” Joshi said in a statement, adding that two assault rifles and “war-like stores” were recovered from the site.

Police said that a second body had been found on Tuesday near the scene of the “firefight”, identified as that of another local resident whom they claim had recently become a militant.

Police sources said Wani had gone to meet his brother Burhan, who is a top commander of the region’s largest group of separatists, the Hizbul Mijahideen.

However residents of the brothers’ hometown of Tral claimed that Khalid Wani had been killed in a “fake encounter” as they took to the streets in protest, hurling rocks at security forces and chanting “we want freedom”.

Police fired tear smoke and live bullets in the air to disperse the protesters, according to witnesses.

At least a dozen people were injured in the clashes, said a police officer at the scene who declined to be named as he was not authorised to speak to the media.

Speaking to reporters, Wani’s father rejected the police and army’s version of events, saying there were no gunshot wounds on his son’s body.

“His head was smashed and teeth broken. There was no bullet injury on his body. He was tortured to death,” Muzaffar Wani told reporters.

Kashmir has been divided between India and Pakistan since the two countries won independence from Britain in 1947. Both claim the territory in its entirety.

Several separatist groups have been fighting Indian forces in the region since 1989, battling for independence or a merger of the territory with Pakistan.

The fighting has left tens of thousands dead, mostly civilians.

India maintains the presence of hundreds of thousands of troops, protected by emergency military impunity laws, in the region to fight the insurgency which has been largely suppressed.

Violence has declined steadily in the region during the last decade but armed encounters between separatists and government forces occur regularly.