Which celebr­ities have rocked the towel dance - and which have shocke­d!
By Sameen Hassan
Published: April 14, 2015
Tweet Email 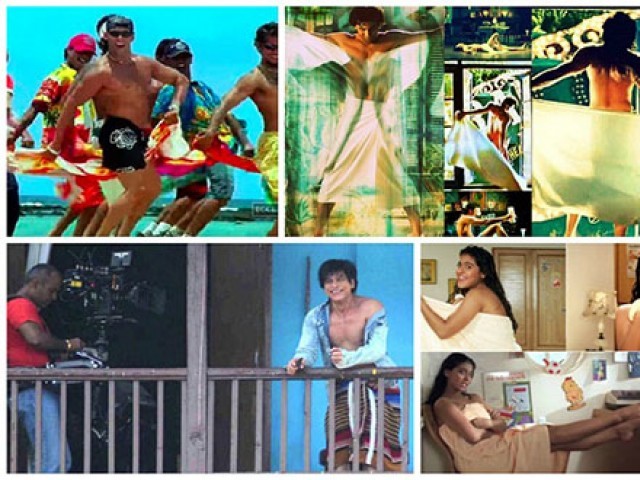 Bollywood, of course, has given its own touch to towel dances, with the towel starring in some of its most memorable songs and dances, and some not so memorable ones.  Be it a day dreaming Simran in Dilwale Dulhaniya Le Jaein Ge or the studious Ranchod Das of 3 Idiots, towel dancing has given us some of Bollywood’s sexiest as well as some of its funniest moments. Here’s a look at the top 5 towel moments. The towel sequence that set the trend! Kajol flitted from smoking hot to extremely adorable and then back to smoking hot as she danced along with her yellow towel, dreaming of the knight in shining armour who was to sweep her off her feet. The movie, Dilwale Dulhaniya Le Jayenge, became one of the longest running and highest grossing Bollywood films of all time, and the song made many young girls firmly believe that their knight would come for them too. Yet, sadly, this was Kajol’s first and last towel moment. Saawariya may have bombed and will soon be forgotten if it hasn’t been forgotten already, but what an entire generation of girls will remember for years to come is Ranbir Kapoor in all his hot chiseled glory in his towel moment in the song Jab se tere naina. It was probably this unabashed display of (almost) every perfectly sculpted muscle on his body that propelled Ranbir into the ranks of present-day Bollywood hunks.

Check out the song here:

A towel moment that we wished had never happened. The song itself was a highly enjoyable upbeat number, and the movie was a huge hit, but the sight of middle-aged men dancing around in towels pretending to be college boys is one we really don’t wish to see again any time soon.
Check out the look here: You can always trust Salman Khan to attempt something downright ridiculous, and he’s still the only one in B-town who can actually get away with it with dignity completely intact, completely entertaining viewers in the process. His quirky dance movies for the song Jeenay ke hein Char Din for the movie Mujhse Shaadi Karogi gained quite a cult following as it was repeated in quite a few B-town talk shows and award functions after that. Only Salman Khan could pull this one off. While Shah Rukh Khan’s Fan is yet to release, photographs from the shooting and film stills have already found their way on the Internet. We are yet to find out what the towel moment behind this still is, but what we do know for sure that King Khan, clad in a towel and a stripped open buttoned shirt will soon join the ranks of the Bollywood towel gang.