Robert Mazur: The man behind the downfall of a Pakistani's greatest commercial achievement

Robert Mazur: The man behind the downfall of a Pakistani's greatest commercial achievement 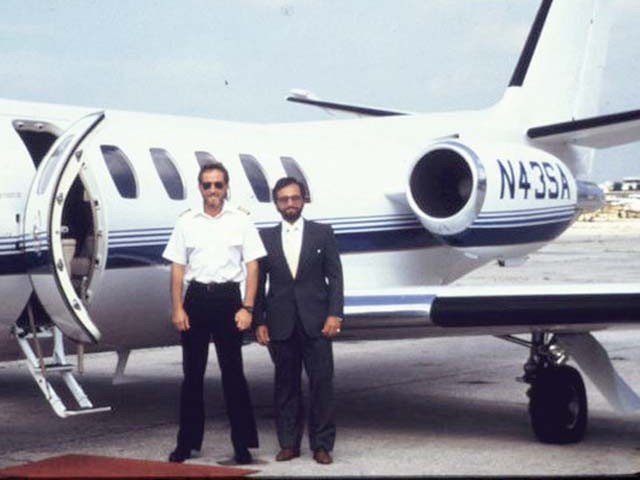 The evidence Mazur collected in his operation coded C-Chase was the most damning proof used to legitimise BCCI’s closure. PHOTO: THE INFILTRATOR

KARACHI: Robert Mazur is the man behind the downfall of, perhaps, a Pakistani’s greatest commercial achievement.

He is the former US Customs agent who led the sting operation which proved Bank of Credit and Commerce International (BCCI) laundered money for Colombian drug traffickers.

And now, ironically, many years later, he says that he is convinced many other foreign banks were doing the same and that they should have faced a similar fate. From left to right: BCCI officials Aftab Hussain, Amjad Awan and Akbar Ali Bilgrami are seen in this picture. PHOTO: The Infiltrator/Robert Mazur.

BCCI was the seventh largest private bank in the world when it was shut globally on July 5, 1991, by the US and UK regulators, in what till this day remains the only multinational financial institution to have paid the price of dealing with the underworld.

It was founded by the charismatic Agha Hasan Abedi in 1972, backed by Middle Eastern investors and run mostly by the South Asians.

“When I debriefed BCCI executives after the operation, they didn’t understand what was happening with them. They used to say they hadn’t done anything which other banks weren’t doing,” Mazur said in an hour-long interview with The Express Tribune over phone from London.

“At that time I thought they were lying. But now I am 100% sure that they were being honest. Many other banks laundered money too –they still do.”

The anger and anguish felt by many former bank employees for being targeted is completely understandable, he says.

“They had done what they were accused of doing. But I am sure if I had walked into any other bank, I would have witnessed the same sort of dealings. I can understand that they [BCCI employees] feel like they were singled out.”

A look into the past

Mazur, who usually goes by the name Bob, has had a successful career as an undercover agent. With an assumed identity of Robert Musella in the mid 80s, he penetrated deep inside the ruthless Medellin Cartel.

In that three-year long stint, Mazur methodically built an image of a high-flying financial adviser. He changed his getup, and pretended to have legitimate businesses that could be used to hide source of funds.

All he needed was a bank that would remit the money willingly. That is where BCCI stepped in. Over the years, he recorded on tape dozens of conversations with various executives in the bank, proving that they knowingly dealt in drug money.

The evidence he collected in his operation coded C-Chase (named after Caliber Chase Apartments in Tampa from where the operation started) was the most damning proof used by the US Senate Sub Committee on Foreign Relations, headed at the time by Senator John Kerry, to legitimise BCCI’s closure.

After an early retirement, he went on to establish a private investigative agency in 1998 aptly named Chase Associates.

That should have been the end of it had he not written a book, which came out in 2009, titled The Infiltrator: My secret life inside the dirty banks and behind Pablo Escobar’s Medellin Cartel.

“I never wanted to be famous. Getting publicity was never part of the plan,” he said. “The idea for this book came during the filming of a 2006 movie Miami Vice. I was a technical consultant for that movie and the producer knew my background. So he said if I ever write a book, he would make a movie on it.”

That wish has been granted. A Hollywood movie is being filmed in London as you read this. Mazur’s role is being played by none other than Bryan Cranston, famous for his role as Walter White in the popular television series Breaking Bad.

How much of this movie would be about BCCI remains to be seen. But his book was equally distributed between the cartel and the bank.

The lowest point in his entire story is how BCCI got entangled in the money laundering affair. It is important to make a distinction here. In this sting operation, it was not the cartel which led agents to BCCI. Rather Mazur took the money to the bank and asked if it could be moved discreetly.

“As I cruised down palm-lined Ashley Drive in downtown Tampa in a money-green Mercedes 500 SEL provided by customs, a building containing the upscale offices of Bank of Credit and Commerce International caught my eye. BCCI in large gold letters glittered from the second story and screamed of overseas accounts, so I called an officer and scheduled an appointment,” he writes in his book.

And this is how BCCI got involved.

“I swear to God that’s exactly how it happened. I was driving and saw BCCI written in gold letters and decided to call up someone there,” he said.

“You also must understand that Tampa is not a cosmopolitan city. It’s not as huge as Miami and they don’t have many banks in the area.”

His first contact in the bank was Rick Argudo, vice president of the Tampa branch, who grilled Mazur about his business history and finally agreed to open up an account. It was also when Mazur realised the bank was up to something big.

Argudo was told that the account will be used to bring in money from Panamanian bank accounts where Mazur’s Colombian clients were accumulating wealth to be invested in the US.

But when Argudo asked if he wanted to move money in the  opposite direction from US to Panama and offered a way to avoid IRS (Internal Revenue Service) his suspicion rose. The book explains in detail how over the years he interacted with six bank officials from Tampa, Panama and Paris, making it obvious time and again that he used his business to serve drug barons in Colombia.

Yet, the bankers continued to provide service, handling certificates of deposits, blank checks, taking deposits and moving money through the intricate web of offshore accounts.

Bank officers whose conversations he tape recorded included Syed Aftab Hussain, Amjad Awan, Akbar Ali Bilgrami (not to be confused with Akbar Mehdi Bilgrami who was BCCI officer stationed in Panama) and Nazir Chinoy – all junior to mid-level employees except Chinoy who looked after bank’s European operation.

It was cat-and-mouse game between Mazur and the bankers as he tried to make his connection with the mob obvious and they refused to hear about it. Seized cash from a cartel salesmen in at US Customs. BCCI was ultimately charged for laundering $14 million.  PHOTO: The Infiltrator/Robert Mazur.

“It’s not my business who your customers are or whatever. I deal with you. As long as we have a relationship…the funds are legit, clear and everything, we do it,” the book quotes Amjad Awan saying at one point.

Mazur went on to becoming friends with many of these bankers. He was invited into their homes and lives.

“I never enjoyed doing what I did. But I had to do a job,” he said in the interview. “I know these are nice people and they couldn’t judge the situation and got stuck in the circumstances.”

He insists he didn’t lie about anything in the book.

“Whatever I have written, I have told the truth. I regret that the operation brought shame to them and I really feel sorry for their families. I can feel their pain because I was away from my family for such a long time.”

When Mazur had gathered enough evidence to take down BCCI, Operation C-Chase came to an end with a dramatic bust.

Robert Musella staged his own wedding since that was the only way to gather all the various characters involved in the BCCI scam from around the world. A white canopy tent, scarlet carpets, 250 chairs and $20,000 worth of Colombian roses en route from Miami – it was the works.

Guests were picked up from the airport in limousines and taken to a ‘bachelor party’. Little did they know, the party was over. They were on their way to being arrested and that too under the camera lights of NBC News. Wedding card of Robert Mazur disguised as Mussella used to lure guests from across the world.  PHOTO: The Infiltrator/Robert Mazur

When agents apprehended Aftab Hussain, he laughed. “I’ve been to bachelor parties like this where women dress up like cops and act like they are arresting you. Where are the women?”

Several bank officers and cartel members were charged and sent to jail. BCCI was found to be involved in laundering $14 million in drug money – a fact missing from Mazur’s book.

Asked if there was any other proof of drug money laundering against the bank, he said that heroin traffickers were linked to BCCI for many years as proven by hundreds of documents seized in the operation.

Even though he admits to never meeting or speaking to Abedi, Mazur has mentioned Abedi in what seems like a desperate attempt to make the story grander than it already is.

At the end he writes that Abedi told Bilgrami to “identify the underground sectors from which we can grab deposits.” But this was not recorded during the investigation. “I am sure this is what Bilgrami narrated to me during the debriefing,” Mazur says.

In last couple of years, Mazur has seen too many banks being caught for money laundering for amounts which would make BCCI’s case appear like a joke. But the banks were let off with just a slap on the wrist. Just a few bankers have been jailed.

In 2009, the Swiss Bank UBS pleaded guilty to discreetly moving billions of dollars out of US for those who wanted to avoid income tax.

Wachovia Bank, one of the largest in US, laundered $420 billion for Mexican drug traffickers between 2004 and 2007. HSBC as well was found to be helping money launderers as it failed to monitor over $670 billion, which moved out of Mexico.

All these, and many other banks, entered into what is known as Deferred Prosecution, with US authorities — allowing them to be monitored for a year and pay a penalty for everything to be forgotten.

“This is a very serious problem. Drug traffickers use banks to turn mountains of cash into power over governments. Then they go on to corrupting the system,” Mazur says.

“I completely agree that all many other banks, which have been found to be involved in money laundering, should have been shut just like BCCI. But I really feel ashamed that government of my country lets these bankers go scot-free.”