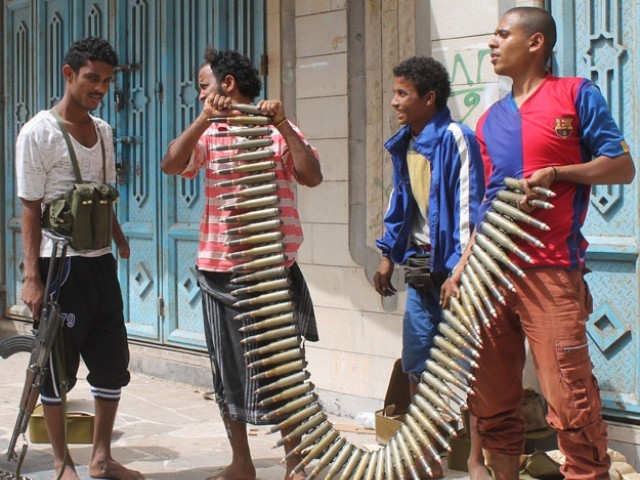 Yemeni fighters opposing the Huthi rebels hold a bullet belt in the northern entrance of the southern Yemeni city of Aden on April 8, 2015 as clashes continue to rage in the embattled city between Huthi rebels and forces loyal to fugitive Yemeni President Abedrabbo Mansour Hadi. PHOTO: AFP

ADEN: Washington warned Thursday it would not stand by while Tehran supports rebels in Yemen, as Iran’s supreme leader denounced Saudi-led air strikes in the country as “criminal acts”.

In the most direct American criticism yet of Tehran’s backing for the Huthi rebels, Secretary of State John Kerry said Washington would not accept foreign interference in Yemen.

“There have been – there are, obviously – flights coming from Iran. Every single week there are flights from Iran and we’ve traced it and know this,” he told PBS television.

“Iran needs to recognise that the United States is not going to stand by while the region is destabilised or while people engage in overt warfare across lines, international boundaries in other countries.”

Washington has backed the Saudi-led air campaign which began last month as the rebels advanced on Yemen’s main southern city of Aden after seizing Sanaa.

Iran’s leader Ayatollah Ali Khamenei warned that the campaign against the Huthis must end.

“This move is not acceptable in the region and I would warn that they must stop these criminal acts in Yemen,” he said on his website.

“The last thing the region and our world need is more of the chaos and crimes we have seen in Libya and Syria,” Ban said ahead of a weekend trip to Qatar.

He warned that the air strikes and the Huthi offensive could have “deep and long-lasting regional repercussions”.

President Abedrabbo Mansour Hadi fled Aden for Saudi Arabia during the Huthi advance and the city has since seen heavy clashes.

Riyadh has accused Tehran of backing the rebels in a bid to establish a pro-Iran state on its doorstep.

But Iranian Foreign Minister Mohammad Javad Zarif insisted Tehran wanted a swift end to the fighting which the World Health Organization says has killed more than 640 people since March 19.

The UN children’s agency warned that around 30 percent of fighters in Yemen’s armed groups were minors.

“We are seeing children in battle, at checkpoints and unfortunately among (those) killed and injured,” Julien Harneis, Unicef’s representative in Yemen, told AFP in Geneva.

Kerry, after world powers agreed a framework deal with Iran on its nuclear programme, said Washington was not looking for confrontation.

“But we’re not going to step away from our alliances and our friendships and the need to stand with those who feel threatened as a consequence of the choices that Iran might be making.”

He also accused the rebels and pro-Saleh forces of stockpiling weapons in built-up areas and said rebels were hiding in residential parts of Aden.

An official in Aden said air strikes also hit a camp in Shabwa province held by the Huthis’ main allies, forces who have remained loyal to Saleh who was ousted in 2012 after an Arab Spring-inspired uprising.

Since Saleh’s ouster, Hadi has been unable to assert government authority in a deeply divided tribal country.

As well as the Huthis, from north Yemen, the government has struggled against al Qaeda in the Arabian Peninsula (AQAP) – considered the most dangerous branch of the militant network.

Yemen for years allowed Washington to wage a drone war against AQAP, but US forces pulled out amid the latest unrest.

Concern has been growing for what aid workers say is a mounting humanitarian crisis.

Some aid trickled into Aden by ship on Wednesday but International Committee of the Red Cross efforts to organise cargo flights into Sanaa have so far failed.

In Aden, witnesses have said the situation is dire, with bodies lying in the streets.

Diplomatic efforts have increased, with the Iranian and Pakistani foreign ministers pledging at talks in Islamabad on Wednesday to work towards finding a negotiated solution.

Zarif laid out a four-stage plan for talks, calling for an immediate ceasefire followed by humanitarian assistance, dialogue among Yemenis and creation of an “all-inclusive government”.

Meanwhile rights groups announced Thursday that dozens of American citizens stuck in Yemen are suing the United States in a bid to get it to evacuate them.

Three US-based rights organisations said 41 plaintiffs were bringing the suit against Kerry and Defense Secretary Ashton Carter, demanding action for citizens whose “lives are in danger from ongoing military action and violent attacks.”

The United States this week acknowledged it has no immediate plans to rescue any stranded nationals in Yemen.