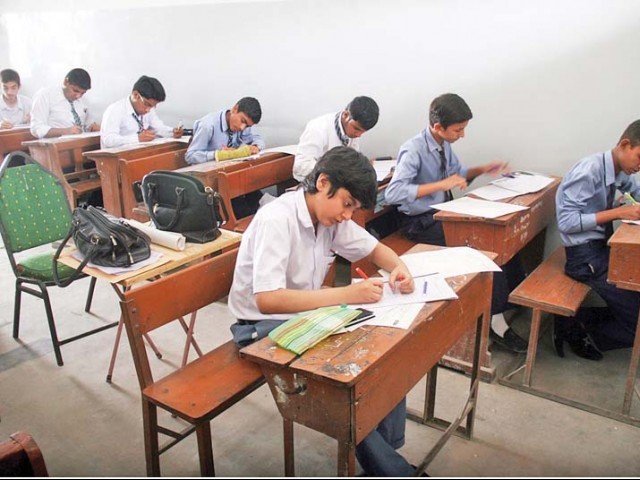 Students appear for the annual Matriculation examinations, which began on Tuesday. The centres were set up in private and government schools across the city by the BSEK. PHOTO: ONLINE

The Board of Secondary Education, Karachi, (BSEK) was in a fix on Tuesday. For all their talk of apt measures taken for the Matric exams, the board’s officials somehow managed to embarrass themselves once again.

Around 500 students found themselves in a quandary as the exam centres where they were supposed to appear for their Matric exam, refused to render their services at the 11th hour. As if the fear of appearing for the exams was not enough, the students had to undergo the ordeal of waiting for the new exam venues to be announced at the last minute.

Tuesday marked the start of the annual examinations of the Secondary School Certificate (SSC) Part-I and II (Science and General Group) in Karachi. The exam was held in 413 examination centres, of which 223 were marked for boys and 190 for girls. The venues were set up in private and government schools in the city by the BSEK.

According to the board’s chairperson, Fasih Uddin, five private schools refused to serve as examination centres at the 11th hour. “The students were shifted to other schools as soon as possible,” he said. Students at the Fairy Land Secondary School at Keamari were shifted to CDGK Girls School, Muhammad Shafi Higher Secondary School at Sher Shah to Shaheen English Grammar at Sher Shah, Oxford English High School at MT Khan road to White Rose Grammar School, Karachi Girls School at Baldia to Madrassah Faiz ul Islam, while Crescent Group of Public School at Balida to Iqra Public School at Baldia. He added that all the schools that had refused at the last minute will be disaffiliated from the BSEK.

When The Express Tribune approached the head of the Oxford English High School, Muhammad Arif, he claimed he had already submitted an application to the BSEK on April 2, a copy of which is also available with The Express Tribune. The letter had asked for the school to be excused from rendering their services this year due to the on-going construction in the premises. “We came to know that our school was going to be an examination centre on Wednesday, April 1. We refused straight away.” Arif said it was almost impossible for them to accommodate as many as 247 students with very narrow streets around the school. “The narrow streets could have caused any untoward situation.”

According to Arif, the assistant controller of examinations, Masroor, had earlier visited the school and agreed that it was almost impossible to facilitate such a large number of students.

Meanwhile, the BSEK examinations controller, Noman Ahsan, told The Express Tribune that by law, all schools were bound to offer their services as examination centres, if asked by the BSEK. “The Oxford High School has been serving as an examination centre for the last three years,” he said.

An hour before the exam, Syed Muhammad Ali stood in a long queue inside the Matric Board office with an envelope in his hand, staring fixatedly at his admit card.

“I received this envelope through the post with my name and roll number on it,” he said showing the cover of the envelope. “The admit card inside the envelope, however, belonged to someone named Khawaja Muhammad Tariq bearing roll number, 601123.” He claimed he had been coming to the office for the last three days but no one was paying heed to his concerns. Ali was not alone in the queue. Hundreds of students were waiting for their admit cards, hardly an hour before the exam.

According to Ahsan, they were those students who did not submit their examination forms on time, which is why they had to go through so much trouble. “They hand over their forms to various agents, who scribble down their name, address and other information incorrectly,” he claimed. “That is why they face these problems later.”

Sindh Assembly session: Opposition leader gets into trouble for tearing up rule book