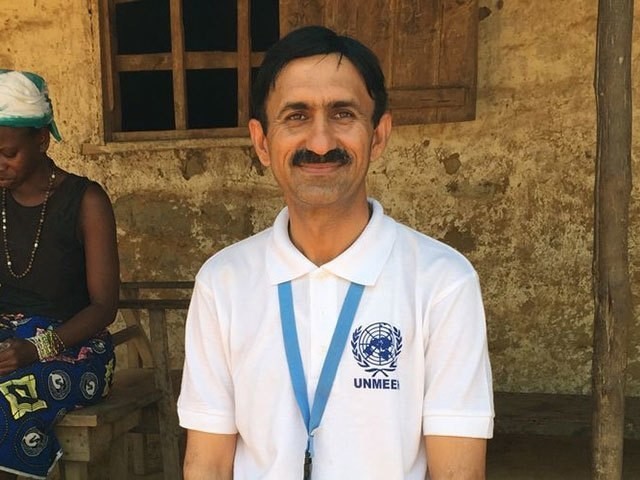 UNITED NATIONS: A Pakistani social worker volunteering for the United Nations campaign to stop the spread of the deadly Ebola virus has become something of a folk hero for his devoted services to the people of a disease-afflicted village of Sierra Leone, a West African country, according to reports received at UN Headquarters in New York.

Khalid Javed Choudhry works mainly in Kunta Dumba, a small village near the border with neighbouring Guinea, which is battling Ebola, and where a number of families have lost their loved ones.

In fact, according to reports, on the day that Khalid and a team from the UN Mission for Ebola Emergency Response (UNMEER) visited, two families were quarantined.

They had come to inspect two latrines that had just been constructed for the quarantined families to avoid further spreading of the virus to other villagers and domestic animals.

One of Khalid’s tasks as a Field Crisis Manager in the district is to supervise the construction of such quick impact projects that help local communities fight Ebola.

The projects include toilets for quarantined homes, fuel for an electricity generator that helps pump treated water into a reservoir for use in the township and at the Ebola Treatment Centres, funds for a group of Ebola survivors to help raise awareness of the virus and for a local radio station to produce programmes in local languages.

To the villagers Khalid’s visits reassure of the UN’s concern for their plight. They in turn acknowledge his efforts by chanting “Mr. Khalid! Mr. Khalid!” whenever they set eyes on him. He smilingly waves back to the people with whom he has developed an uncommon affinity.

“Khalid is a good man, we love him,” says Mohamed Kamara, a project officer with the non-governmental organisation, United for the Protection of Human Rights, which is UNMEER’s implementing partner in the district.

“He is a catalyst. He pushes us to do our jobs. He has adapted himself to the culture of our people. He feels our pain, and we like his style.”

Khalid Javed Choudhry left his wife, a son and a daughter in Pakistan to volunteer for an Ebola fight in the far flung areas of Sierra Leone.

“I was involved in efforts to eradicate polio in Pakistan, and I understand how difficult behaviour change can be. So, when I heard about Ebola, I knew behaviour change was going to be key and I wanted to come and help,” he said.

Arriving Sierra Leone in mid-January, Khalid had to live with little or no electricity, without easy access to medicines and having to eat strange foods. But he soon adjusted and now feels at home.

He notes, “I was mentally prepared for this situation. I did not expect to come to a place where social services are working smoothly.”

Despite the discomforts, Khalid has connected emotionally with the villagers.

“I look at them, particularly the families that have lost loved ones due to Ebola, and I say to myself, at least I have not lost anyone.”

He said helping to end Ebola is his mission and also his passion.

UNMEER Field Operations Manager, Martin Leach, said that “Khalid has just the right personal approach when working with UNMEER’s partners in fighting Ebola: he is considerate, patient yet determined.”

While Khalid is looking forward to re-joining his family in Pakistan, he conveys a sense of urgency even desperation whenever he talks about the Ebola fight. “I am hoping these people can return to a normal life very soon.”

By the end of March, Kambia was still an Ebola hotspot.

“Behaviour change is the key to breaking the transmission chain, and from what I can see, the situation is slowly improving,” Khalid said.

11 things Pakistanis are great at