People came togeth­er for the event from across the countr­y
By Maryam Usman
Published: March 29, 2015
Tweet Email 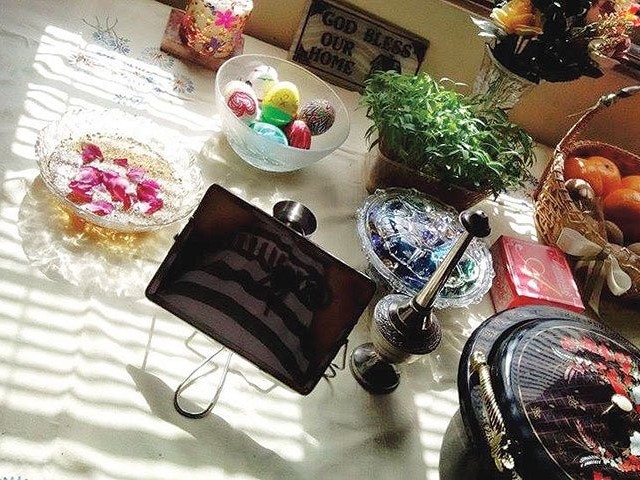 As part of the Navroze festivities rosewater is sprinkled on guests and a mirror is held up for them to see their smiling faces. PHOTO: SHARMEEN GARSHASB

ISLAMABAD: Amid resounding drums, spirited dance performers and all-around festive air, the Navroz festival was celebrated with fervour at Lok Virsa on Saturday.

Heralding spring and the Persian New Year, the event is traditionally observed on March 21 but it had to be postponed owing to security arrangements for the Pakistan Day parade in the capital this year.

Adorned with colourful buntings, the area outside the museum housed stalls of different ethnic communities as people came together for the event from across the country. An Afghan stall had men and women in bright traditional attire, showcasing ethnic jewellery and decoration pieces.

Razia Bibi tended to a stall from the Hazara community in Quetta. With a silverware tray containing portion sizes of fruits, vegetables and meat, rich, desi desserts such as sheer khorma and souji ka halwa and dry fruit, she spoke about the traditional food customs for the celebration.

“We meet and greet guests with these delights on Nowroz,” she said, pointing to a silver pot, adding that it was originally used as a water vessel to wash hands but had become more of an antique decoration piece in contemporary times.

Lok Virsa Executive Director Fouzia Saeed commented that the festival gathered people from different communities and ethnicities in an all-encompassing manner, since sometimes there were only stereotypical cultural representations which failed to capture the essence of the festivity.

“We want to bring diversity and celebrate the different communities while giving enabling people to learn about our rich cultural heritage.”

DW Baig, a folk musician and cultural activist, said that the event is enthusiastically celebrated every year in his native Shimshal Valley in Gilgit-Baltistan.

A group of 20 senior artists comprising the Silk Route Caravan Group had come to depict the traditional caravan from China to India, a cultural performance that remains only in the valley. The performance entailed a narration in the form of a dance, reincarnating traders from olden times who would travel with their trade goods and gather from different areas to share their stories in the form of rubbayat.

“The music has two aspects – one is loud and flamboyant, involving instruments such as dadang, dammal and surnai which are played for dance while softer rhythms are played with a touch of Sufism on the instruments rubab, sitar and duff,” Baig explained.

Clad in highly ornamented traditional gear, the performers impersonated traders, promoting their prized silken fabrics and enlightening one another of their travel experiences in a playful, colourful setting. Garbed in flowing, shimmery gowns and traditional woolen caps, the performers entertained the audience with their rhythmic dances and animated expressions.