Co-pilot sought psychi­atric help for 'a bout of heavy depres­sion' in 2009, was still gettin­g assist­ance from doctor­s
By AFP
Published: March 27, 2015
Tweet Email 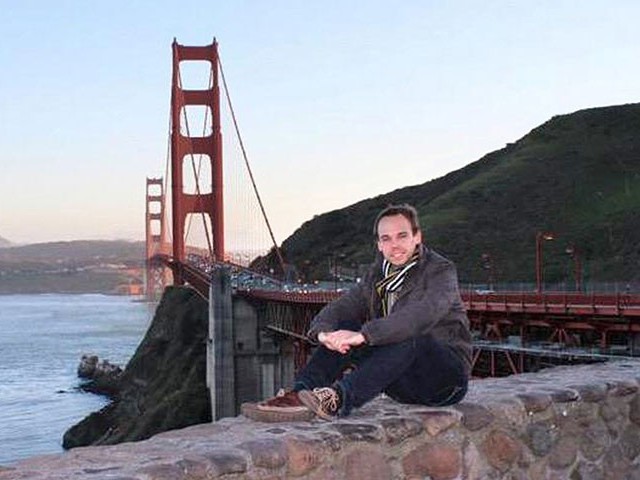 This picture circulating on the internet and social networks allegedly shows Andreas Lubitz, posing in front of the Golden Gate Bridge in California. PHOTO: AFP

MONTABAUR: The Germanwings co-pilot who flew his Airbus into a French mountainside, killing all 150 aboard, suffered serious depression, a German newspaper reported Friday, raising new questions over how he was cleared to fly.

The black box voice recorder indicates that Andreas Lubitz, 27, locked his captain out of the cockpit on Tuesday and deliberately sent Flight 4U 9525 into the Alps, French officials say, in what appears to have been an act of suicide and mass murder.

Read: Germanwings plane with 148 on board crashes in French Alps

French Prime Minister Manuel Valls said that “everything is pointing towards an act that we can’t describe: criminal, crazy, suicidal.”

Neighbours and colleagues described the co-pilot as a well-liked man, a fitness fanatic who lived with his parents in a leafy, upscale street in the west German town of Montabaur.

But a troubled man apparently hid behind that guy-next-door image.

Read: Pilot locked out of cockpit before Germanwings crash: source

Lubitz sought psychiatric help for “a bout of serious depression” in 2009 and was still getting assistance from doctors, Bild daily said, quoting documents from Germany’s air transport regulator Luftfahrtbundesamt (LBA).

He was still receiving regular medical treatment, Bild reported, adding that Germanwings’ parent company Lufthansa had transmitted this information to the LBA.

The paper also cited security sources as saying that Lubitz and his girlfriend were having a “serious crisis in their relationship” that left him heartbroken and distraught.

Lufthansa CEO Carsten Spohr said that Lubitz had suspended his pilot training, which began in 2008, “for a certain period”, before restarting and qualifying for the Airbus A320 in 2013.

According to Bild, those setbacks were linked to “depression and anxiety attacks”.

German police combed for clues in an apartment Lubitz used in Duesseldorf, but spokesperson Marcel Fiebig told AFP there was no “smoking gun”.

Searches were also carried out at his parents’ house. The street was cordoned off Thursday as officers wearing gloves emerged with boxes, bags and briefcases but was open again to traffic Friday.

Lubitz locked himself into the cockpit when the captain went out to use the toilet, then refused his colleague’s increasingly desperate attempts to get him to reopen the door, French prosecutor Brice Robin said.

According to Bild, the captain even tried using an axe to break through the armoured door as the plane was sent into its fatal descent by Lubitz.

This could not be immediately confirmed, but a spokesperson for Germanwings told Bild that an axe was standard emergency equipment on board the aircraft.

The tragedy has already prompted a shake-up of safety rules at airlines with several airlines announcing a new policy requiring there always be two people in the cockpit.

A Lufthansa spokesperson said the company was considering a similar move.

Meanwhile, the UN world aviation body stressed that all pilots must have regular mental and physical check-ups.

German Chancellor Angela Merkel said the findings that Lubitz appeared intent on crashing the plane added an “absolutely unimaginable dimension” to Tuesday’s tragedy, in which most victims were German and Spanish nationals.

Robin said the passengers were killed “instantly” by the crash and probably unaware of the impending disaster until the “very last moment”.

In the northwestern German town of Haltern, which lost 16 students and two teachers who were returning from a school exchange, the revelations caused shock and anger.

The shaken principal of the stricken school, Ulrich Wessel, said “what makes all of us so angry (is) that a suicide can lead to the deaths of 149 other people…. It leaves us angry, perplexed, stunned.”

German President Joachim Gauck, a Protestant pastor, attended a memorial service in Haltern Friday and also extended special condolences to the families of the victims in Spain and other countries.

Meanwhile in Montabaur, Mayor Edmund Schaaf urged reporters encamped in the community to show restraint with Lubitz’s parents, a banker and a church organist.

“Regardless of whether the accusations against the co-pilot are true, we sympathise with his family and ask the media to be considerate,” he said.

Investigators say Lubitz’s intention was clear because he operated a button sending the plane into a plunge.

The French prosecutor played down the likelihood of Lubitz accidentally taking the plane down with an involuntary turn of the descent button.

“If you passed out and leaned over on it, it would only go a quarter-way and do nothing,” Robin said, adding Lubitz, who had worked for the Lufthansa group since 2013, had set the controls to “accelerate the plane’s descent.”

For the next eight minutes, Lubitz was apparently calm and breathing normally.

“He does not say a single word. Total silence,” Robin said.

Lufthansa’s Spohr said there wasn’t “the slightest indication what might have led” to Lubitz’s actions.

The second-in-command had passed all psychological tests required for training, Spohr told reporters, insisting: “He was 100-percent airworthy.”

Recovery operations at the crash site were ongoing, with French officials trying to find body parts and evidence. A second black box, which records flight data, has not yet been recovered.

Not participating in Yemen war but will defend Saudi territorial integrity: Asif