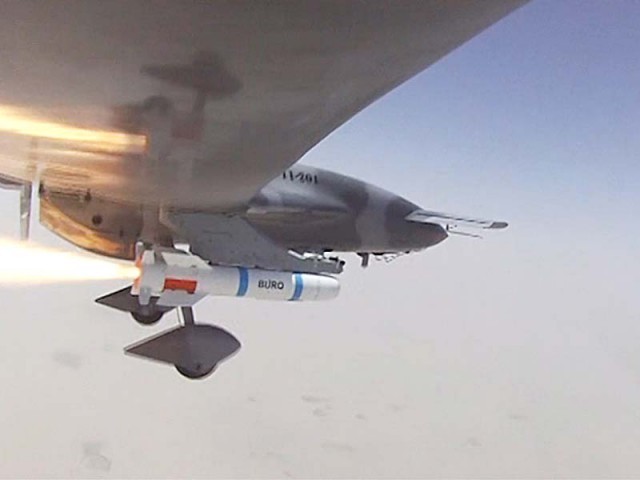 The strategic Tirah Valley has been the scene of fierce fighting between the Pakistani military and a potpourri of militants for nearly two weeks.  The military claims to have achieved ‘significant successes’ in the battle for Tirah. And security officials say Pakistan’s indigenously-developed armed drone ‘Burraq’ has turned the tide against the militants in this offensive.

The remotely-piloted aircraft ‘Burraq’ and laser-guided missile ‘Burq’ were tested on March 14, taking Pakistan a step closer to acquiring the technology it has long demanded from the United States. However, senior security officials told Express News that much before ‘Burraq’ was publicly showcased it had been tested in live combat against militants in the Tirah Valley.

The officials would not say how many targets have been taken out with the help of Burraq, but they claimed that senior militant commanders, including those from Mangal Bagh’s Lashkar-e-Islam (LeI) and Tehreek-e-Taliban Pakistan (TTP), were killed in Pakistani drone strikes.

According to dronewars.net, a website that provides information and comment on use of drones, 30 other countries have large military drones. Apart from its pure military usage, Burraq also has valuable reconnaissance importance and Tirah has been a testing ground for it.

“They have built bunkers in the mountains covered by a wall which initially made it difficult for us to target,” one security official said. “However, their movements were tracked and their hideouts destroyed with the help of laser-guided missiles,” he added.

On March 18, a gathering of militants was targeted in a border village in Tirah which led some private TV channels to report that TTP chief Mullah Fazlullah was also among those killed in the strike. Officially, Fazlullah’s death was not confirmed, while the TTP denied the media report as propaganda.

After a fierce battle that lasted well over a week, almost 109 militants were killed. But the victory in sight has not come easy as the ridge connecting Pakistan and Afghanistan has been the scene of bloody fighting. Though the militants have been mostly dislodged from the ridge, the LeI and TTP are getting support from militant groups from other parts of the tribal belt as well as from Afghanistan.

The officials said the fleeing militants had strapped bombs to the abandoned bodies of their comrades and security personnel killed in the fighting. Since these were ‘pressure bombs’, a special team from the Corps of Engineers had to be called in to defuse them.

While the North Waziristan operation was thought to be the mother of all battles, the Tirah operation has turned out to be more difficult than the military had anticipated. Three militant factions – LeI, TTP and TTP Jamaatul Ahrar – have ganged up to put up a united front. On the first day of combat there were over 200 fighters, but their numbers have multiplied since then. Analysts say peace in the region now hinges on the outcome of the Tirah battle.