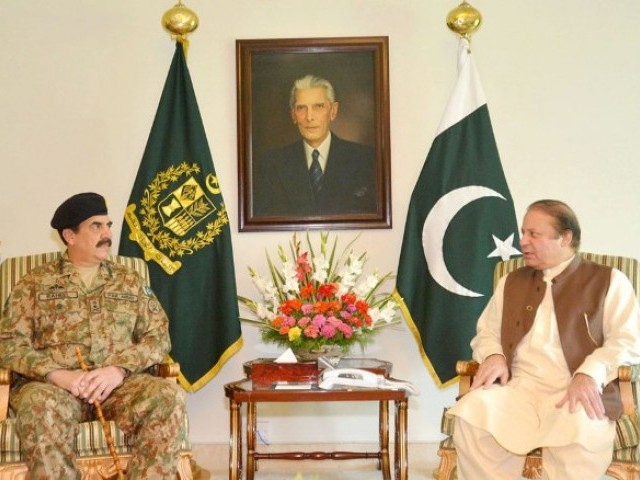 They have decided that not only should the sphere of the crackdown be expanded but it should also be carried out across the board. PHOTO: PID.GOV.PK

The prime minister and the army chief have agreed that come what may, the ongoing Karachi operation against criminals should be taken to its logical conclusion, stated a communiqué.

They have decided that not only should the sphere of the crackdown be expanded but it should also be carried out across the board.

These decisions were taken on Thursday at the PM House, where Chief of Army Staff (COAS) Gen Raheel Sharif had called on PM Nawaz Sharif.

Discussing the latest developments in Karachi, the PM lauded the operation and offered all-out support of the federal government to the Pakistan Army to tackle terrorism across the country.

They said previous operations were carried out by the police, who were targeted by criminals for their participation, which was why the current crackdown was being conducted by the paramilitary forces.

The PM said the centre had fulfilled the financial requirements for rehabilitation of the internally displaced persons of North Waziristan Agency.

The COAS and the PM also discussed matters related to the return of the temporarily displaced persons.

Increasing the number of Frontier Corps wings for the security of the western borders and Federally Administered Tribal Areas came under discussion as well.

Regarding former Muttahida Qaumi Movement (MQM) activist Saulat Mirza’s revelations, both the civil and the military leaderships termed them “alarming” and agreed on probing into the allegations.

About the fate of MQM-backed Sindh Governor Ishratul Ebad, who Mirza accused of providing protection to criminals at police stations, sources said Ebad had the blessing of the federal government and if Mirza’s allegations were to be proved right, then he would be asked to step down.

The COAS and the PM said the ongoing operation was targeting militant wings of political parties and not specifically the MQM.

They agreed that the crackdown must be conducted across the board and expanded to Punjab, Balochistan and Khyber-Pakhtunkhwa.

They said when Lyari gangster Uzair Baloch would be brought back to Pakistan, his revelations would pave the way for the Rangers to take action against land grabbers and target killers affiliated with the Pakistan Peoples Party.

The PM had earlier held a meeting with his party’s National Assembly members from the Faisalabad division and shed light on the Karachi operation.

He said that before launching the operation in Karachi, all the political parties had been taken on board, adding that the crackdown was initiated only after all the parties had reached a consensus.