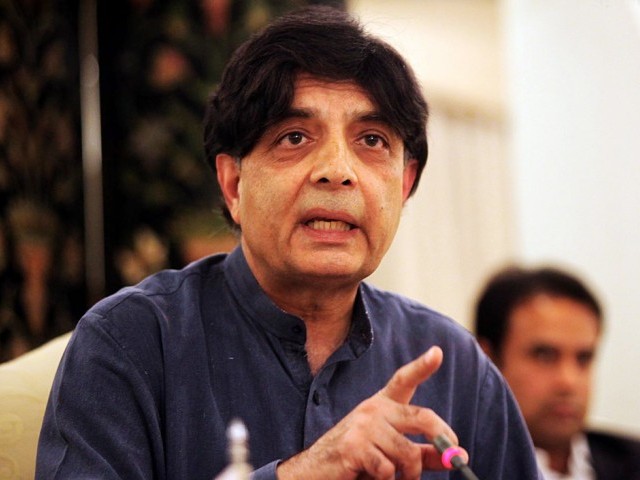 Clarifying the reason for the stay in executions of death-row convicts, Saulat Mirza and Shafqat Hussain, who were scheduled to be hanged early Thursday morning, Interior Minister Chaudhry Nisar said their executions have been halted for 72 hours owing to different reasons.

Muttahida Qaumi Movement’s convicted worker Saulat Mirza and ‘underage’ convict Shafqat Hussain were to be sent to the gallows this morning but just hours before their executions were halted.

“We have put on hold Saulat Mirza’s execution for 72 hours owing to health concerns,” Nisar apprised the National Assembly on Thursday.

In an unusual turn of events, as time for his execution drew closer, Mirza alleged in a video confession that he killed former KESC Director Shahid Hamid on the directives of party chief Altaf Hussain.

According to video released by a private television channel late on Wednesday, Mirza alleged that he received the order for the ‘hit’ from Altaf at MQM leader Babar Ghauri’s residence.

Mirza revealed that orders were given to him on telephone by the party chief himself. Usually, the party chief would either give orders himself or through the likes of Babar Ghauri, Mirza said.

Following the video, Mirza’s execution was halted but there was no reason given for the stay till now.

Addressing the stay on Shafqat Hussain’s execution, the interior minister said owing to the confusion over Hussain’s age his execution was halted.

However, Nisar maintained till now there is no evidence he was juvenile at the time of his sentence.

“We have moved pillar and post for his record,” he said.

“We contacted NADRA in Azad Jammu and Kashmir where he hails from but there is no evidence to prove he was juvenile at the time of conviction,” Nisar added.

Referring to his speech in the National Assembly two days ago, Nisar upheld he had stated they will halt his execution if evidence was brought forward proving his age. “But there is no evidence and we have stayed it for 72 hours.”

Briefing the assembly on his meeting with British High Commissioner Philip Barton on Wednesday, Nisar said, “I briefed him about Imran Farooq murder case.”

“There is no political motive behind investigating Dr Imran Farooq murder case,” he added.

Nisar clarified the government is going to cooperate with the Britsh government so Farooq’s murderers are brought to justice.

Farooq, 50, was a former leader of MQM and had lived in London in self-imposed exile from 1999. He was on his way back from work when he was attacked outside his home in Edgware, north London, in September 2010. A post-mortem gave the cause of death as multiple stab wounds and blunt trauma to the head. A kitchen knife and a house brick used in the attack were recovered at the scene.