It was also announ­ced by the Sindh govern­ment that Aansoo will be given a salary of Rs10,000 per month.
By Sameer Mandhro
Published: March 19, 2015
Tweet Email 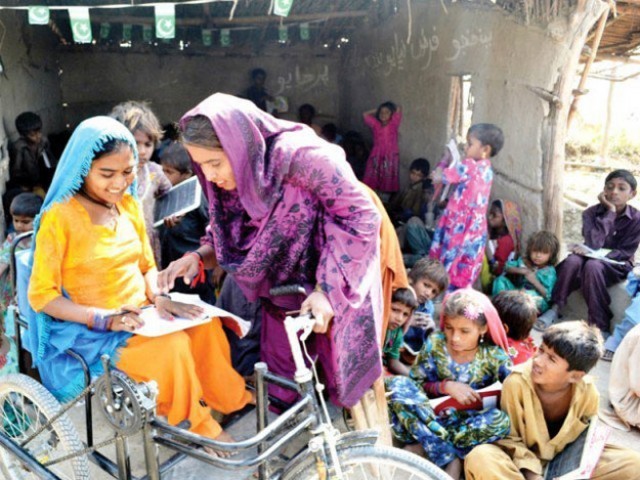 There are 336 students in her school and she hired six additional teachers. PHOTO: EXPRESS

After declaring her the ‘Malala of Sindh’ and promising complete support for her cause, it took the Sindh government only a few months to forget Aansoo Kohli.

Aansoo, a physically challenged girl who belongs to one of the Hindu Kohli tribe, is facing a difficult time. “It seems all were just mere announcements,” she said, talking about the Sindh government’s promises.

Inspired by media reports, members of the Sindh Assembly and the Senate visited her village, Miyani Ji Dhani, located about 28 kilometres from Umerkot. They encouraged her to continue her struggle to educate children in the area and invited her to the Sindh Assembly.

Education Minister Nisar Ahmed Khuhro also visited her village and handed over an offer letter and a cheque of Rs80,500. Moreover, Senator Aajiz Dhamrah visited her repeatedly and gave her Rs200,000, which she spent on the construction of her school. The provincial government also announced that all the children of her school will be given a one-time meal. Further, she was promised that the link road for her village will be constructed while the school building will also be built.

There are 336 students in her school and she hired six additional teachers. “The teachers have not been given salaries for the last three months,” she said. Meanwhile, she fixed a hand pump last week but it was removed by unidentified persons. “I don’t know why these things are happening,” she lamented. “The hot days are about to come and my students will have to face more difficulties.”

It was also announced by the Sindh government before the media that Aansoo will be given a salary of Rs10,000 per month. “I haven’t been given a single salary,” she said. “Regardless, I worked for education before the government came forward and I’ll continue doing so even if they don’t help me.”

“People laugh at her now,” said Janib Dalwani, who has been helping her from day one. “Leaving one amid crisis discourages those who want to do something for the society.”  And the unwavering Malala of Sindh waits.