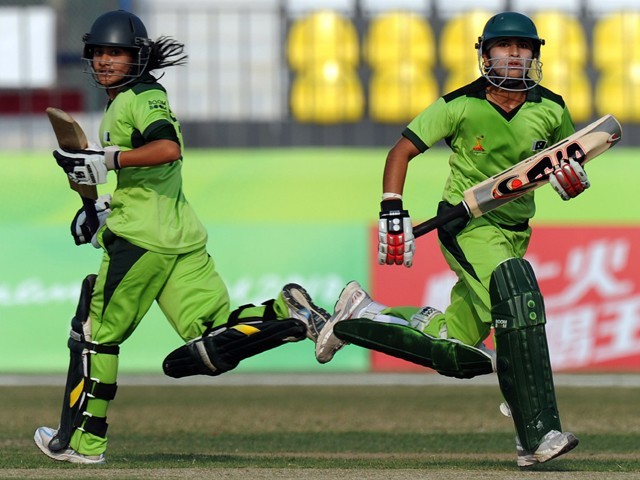 The women in green got off to a poor start, as Javeria Khan (nought) and Bismah Maroof (two) were dismissed without putting up any resistance. PHOTO: AFP/FILE

KARACHI: Pakistan women’s cricket team wasted the perfect opportunity to register a series win over South Africa, who triumphed in the third and final ODI by five wickets to seal the series 2-1 at the Sharjah Cricket Stadium in the UAE.

Pakistan had won the first ODI before South Africa bounced back in the second to level the series 1-1.

In the decider, Pakistan batted first after winning the toss, but could only crawl to 153-9 in their 50 overs.

The women in green got off to a poor start, as Javeria Khan (nought) and Bismah Maroof (two) were dismissed without putting up any resistance.

Opener Marina Iqbal was also sent back to the pavilion while trying to consolidate the innings, with Pakistan 46-3 at that stage.

Nain Abidi and skipper Sana Mir then put up a 50-run stand at a slow pace. Nain got out after her lethargic 27 off 73 deliveries — which consisted of just three boundaries — as the two consumed 111 balls in the 50-run stand.

Sana kept fighting from one end but was unable to get any able support from lower middle-order — Nida Dar (three), Asmavia Iqbal (five) and Rabiya Shah (one).

The captain’s innings finally ended at 52 runs off 101 balls. Sumaiya Siddiqui remained unbeaten on 24 off 19 deliveries, hitting five boundaries in the process, which propelled Pakistan to 153.

In reply, South Africa were initially put on the back foot by Sumaiya, who took two early wickets. However, the opponents held on and eased to 156-5 with 3.2 overs to spare.

Lizelle Lee top-scored with 54 as she clubbed a six and five boundaries, while captain Mingon du Preez (43) and Niekerk (27) made important contributions as well.