The TV indust­ry is all set to entert­ain you with a divers­e range of drama serial­s
By Alishba Nisar
Published: March 18, 2015
Tweet Email 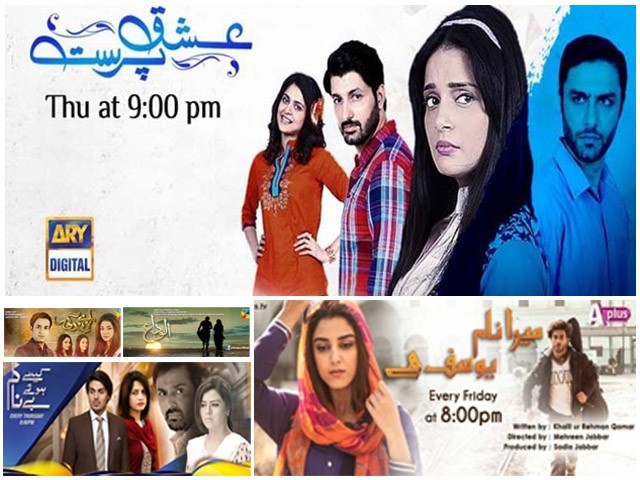 KARACHI: It’s hardly surprising that our TV serials have gained popularity across the globe. Why wouldn’t they; our actors are brilliant, our writers, amazing and our directors, highly skilled.

Lately, the Pakistani television industry has been producing some truly hard-hitting content and this year is no different. Here is our list of the 11 most interesting dramas of 2015 that you cannot miss!

Another drama that poses the question: “What’s worse: a home without a woman or a woman without a home?”

The story-line depicts the bitter realities of society and unfolds the misfortunes and hardships a widow has to face in order to survive.

Although not much has been revealed about the storyline yet, having seen the promo we can tell there will be a lot of captivating family drama and love in this serial. Might we add, the soundtrack is splendid!

Date of premiere: Not Released Yet

The storyline revolves around a religious extremist woman who raises her children in a conservative environment while completely unaware of her daughter’s dream to become a singer. Her manipulative manner towards others is in stark contrast to what her religion preaches and that’s what keeps this serial so intense and interesting.

An adaptation of Farhat Ishtiaq’s famous novel, Dayar-e-Dill, the story focuses on issues faced by a family after the parents’ divorce; the real conflict arises when each parent feeds hatred into the hearts of their children against the other parent. Get ready for a host of moral lessons on relationships.

Shedding a different light into the lives of those affected by adoption, this story highlights the life of a female driven family – a mother with only daughters – who adopt a boy. Not only is the cast superb but the story is nothing less than gripping.

We’re suckers when it comes to love, not only do we gush over romantic dramas but we can’t wait to watch when the next episode will air. Well this serial won’t disappoint you; a little bird tells us its story is all about a love affair sure to keep you asking for more!

One of the most awaited serials, Mera Naam Yousuf Hai follows the lives of two lovers. With a strong writer and talented director on board, we can bet Mehreen Jabbar will do justice to this drama.

Divorce brings with it a heavy baggage to bear; this serial shows the effects of a neglected child raised by divorced parents. The perception the child develops about relationships is the crux of the story.

The same cast and writer who brought to us the famous drama Dil-e-Muztar are back with yet another serial titled Alvida. The first few episodes depict a love triangle but with Shehzad Kashmiri directing this project we are sure it’s bound to take a U-turn at any point.

What are we without our rights? A directorial trio work together on this serial to highlight the importance of standing up for your rights. However, not all those who stand up for their rights get full support and that is exactly what keeps us glued to this serial.

Written by: Be Gull

It’s hard to lose a sister but to marry her husband after her death is a different ball game altogether. A story fueled by a female protagonist; Javed Sheikh directs a family drama which takes on the story of a widow who marries her rich brother-in-law after her sister’s death.