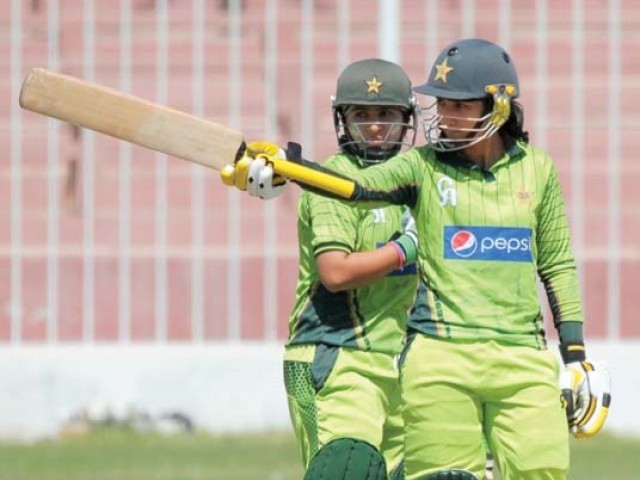 Bismah’s 99 included seven boundaries and she bagged a wicket too. PHOTO: PCB

KARACHI: Although Bismah Maroof missed out on her maiden ODI century by one run, her efforts helped Pakistan to a 57-run win in their ICC Women’s Championship match played at the Sharjah Cricket Stadium in the UAE.

It was a tale of two misses for Pakistan as opener Javeria Khan was also run out before her half-century.

Batting first, Pakistan received an early blow as opener Marina Iqbal walked back after scoring just six runs. However, Bismah and Javeria overcame Marina’s loss to rebuild the innings with an 88-run stand for the second-wicket before leg-spinner Sune Luus gave them a scare with her quick four-wicket burst.

However, Bismah continued scoring from other end and found the much-needed support from Asmavia Iqbal as the two accumulated 74 runs together, taking Pakistan to 216-6 in their allotted 50 overs.

Bismah’s wicket was taken on the last ball of the innings. Her 99-run knock off 129 balls was studded with seven boundaries, while Asmavia starred with a 45-ball 35 as she struck three strikes to the fence.

In reply, South Africa could only manage 159-9 in their quota as Anam Amin picked up three wickets, while skipper Sana bagged two. Asmavia, Bismah and Nida picked up a wicket each.