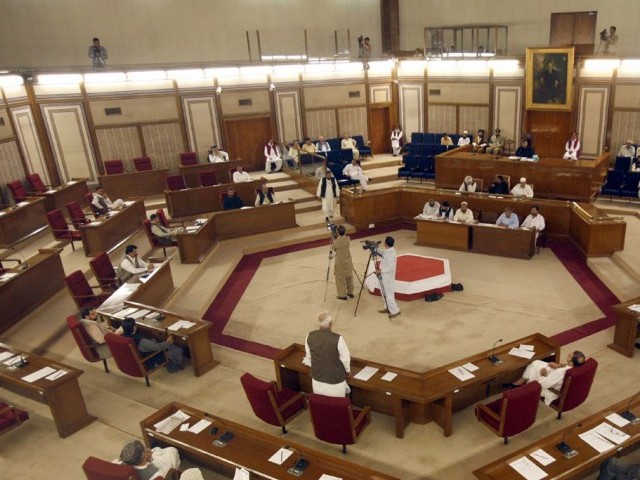 QUETTA: Treasury bench member Ali Madad Jatak staged a walkout from the Balochistan Assembly on Thursday in protest against the killing of five Baloch in a Turbat gun battle. Jatak held the security forces responsible for the unprovoked attack.

During the session, which met under the chairmanship of Deputy Speaker Matiullah Agha, Jatak raised the issue on a point of order and strongly condemned the Turbat incident in which Frontier Corps personnel stormed the house of BNP central leader Ayub Gichki and killed five people, including his two young sons.

“Pakistan Peoples Party is making every effort to normalise the situation in this region through democratic means but on the contrary such incidents have become a routine matter and have been further aggravating the situation,” he added.

Jattak said that all the five people who had been killed were innocent. “It seems there is a conspiracy hatched against democratic government to sabotage its sincere efforts to restore peace,” he said.

On a point of order, Maulana Wasey said that Balochistan is burning and the situation is deteriorating every passing day.

He appealed to all political forces, including religious and nationalist parties who do not have representation in the assembly, to sit together and thoroughly analyse the current situation and evolve a comprehensive strategy to secure peace in the province.

“It is high time to take practical and sincere steps because the situation is going from bad to worse and if precautionary measures are not taken immediately no one will be able to control the situation,” he added, referring to the bomb attack on the governor of Balochistan, the suicide attack on Senator Maulana Sherani, increasing incidents of kidnapping and the alleged presence of US forces in the province.

Earlier, PML-Q member Jaffar Mandokhel said that he had submitted an adjournment motion to condemn the bomb attack aimed at the governor’s convoy in Kalat district. The deputy speaker responded that it will be taken up on December 4.

PPP members, led by Sadiq Umrani, staged a walkout because the deputy speaker did not allow the party’s parliamentary leader to condemn the attack on the provincial governor. “We boycotted because of the discriminatory attitude of the deputy speaker,” Umrani told the media.

Meanwhile, journalists also boycotted the coverage of Balochistan Assembly proceedings on Thursday in protest against the killing of journalist Lala Hameed Baloch whose bullet-riddled body had been found near Turbat on the eve of Eid.

The journalists demanded a transparent high-level inquiry into the murder and the arrest of culprits involved in the crime.

“The government should ensure protection to journalists and unearth the killers,” Issa Tareen, a senior member of Balochistan Union of Journalists told The Express Tribune.

Ministers of the ruling party Younis Mulahzai and Asfandyar Kakar assured that they would take up the case with the chief minister and said that specific measures would be taken in this regard.

“We condemn the extra-judicial killings because courts are already available for this purpose and such acts will further fuel the deteriorating situation,” Mulahzai told reporters.