Consum­ers yet to benefi­t from lower petrol­eum rates.
By Our Correspondent
Published: March 2, 2015
Tweet Email 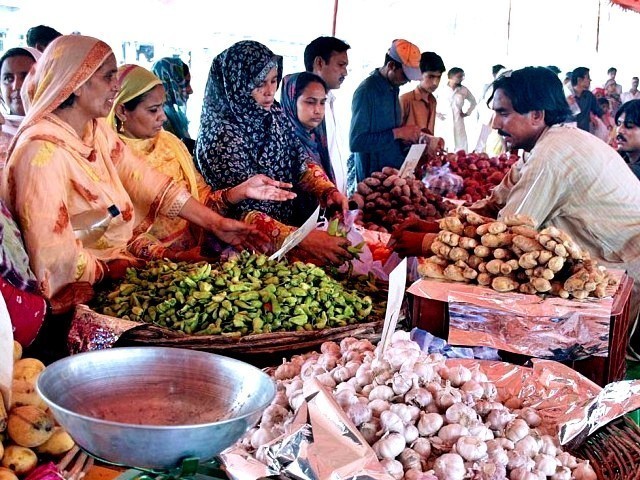 Traders maintained that prices of essential commodities are still not in proportion with reduction in prices of oil products during the last couple of months PHOTO: APP

ISLAMABAD: Even though prices of some edible items have witnessed a marginal reduction, it is still not commensurate with the price cut in petroleum products. Moreover, no letup in the cost of industrial products has been witnessed which is why consumers have not yet benefitted from the government’s ‘pro-public’ measures.

Traders maintained that prices of essential commodities are still not in proportion with reduction in prices of oil products during the last couple of months.

The transport association, meat merchants, food chain companies and majority of other private business cartels including sugar mills and cement industries and rerolling mills have not passed on the benefits of the fuel cuts to the people.

Zafar Ali, a resident of Islamabad, said that except for the reduction in petroleum prices, any cut in other utilities’ bills has not been witnessed. He said among kitchen items, only the prices of a few vegetables have come down otherwise all other products, including milk, sugar, tea, pulses, spices and meat, are being sold at the old rates.

Things are not any different in Rawalpindi. Niaz Khan, a resident of the garrison city, said prices of flour and some seasonal vegetables have come down after the reduction in petroleum prices. He, however, added that transporters were still charging old fares within the city as well as on intercity routes.

Nadeem Khattak, an accountant, said different mafias and cartels were ruling over the country and it looks as if food chain companies, cartels of sugar mills, cement and rerolling mills are beyond the law.

“The individual businesses as well as public limited companies are making huge profits in absence of a healthy competition or a competent regulator in the country,” complained Khattak, adding that the prime minister had assured that the reduction in petroleum products would benefit consumers widely but the government has failed in standing by its words.