Will 'boom boom' Afridi treat his fans to a birthday win?

Will 'boom boom' Afridi treat his fans to a birthday win?

Many hope that turnin­g 35 will only add to the all-rounde­r's perfor­mance in an all-import­ant match
By Web Desk
Published: March 1, 2015
Tweet Email 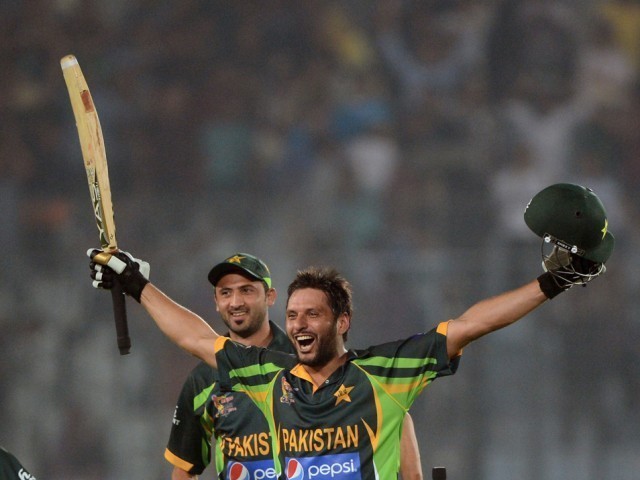 Pakistan cricket fans, pretty much like the team, have been down in the dumps. Two losses out of two matches at the World Cup has soured almost every fan, and put immense pressure on the team. But things could look up if Shahid Afridi, arguably Pakistan’s most popular cricketer, comes up with a performance treat for fans on his 35th birthday.

This is what many fans are hoping for as Pakistan take on Zimbabwe in an all important group ‘B’ match on Sunday.

Many who wished ‘Lala’ a happy birthday, hope that the all-rounder will give them all a ‘birthday treat’ with a scintillating, match-winning performance.

Happy birthday @SAfridiOfficial! Give us a birthday treat in the form of a boom boom knock tomorrow! #ForeverYoung pic.twitter.com/GU4w6knIwZ

Happy birthday @SAfridiOfficial I wish you deliver us something special on your bday #CWC15 pic.twitter.com/PFeTmAeO6R

A national hero. A legend. The son of Pakistan. The nation wishes you a very, very Happy Birthday @SAfridiOfficial pic.twitter.com/fqdtBl44ap

Today's #ShahidAfridi 35th birthday, lets see he will score 35 or not in today's match ;) #PakvsZim

My friend wrote this for you @SAfridiOfficial do read it and respond of possible :) pic.twitter.com/xer8Eyrgn0

Whether Afridi will be able to perform or not, remains to be seen, one thing he may not be able to see before the match are the social media posts for him because of a ban imposed by the cricket board.

While no one really knows which side of Afridi will turn up for a match before he picks up either the bat or the ball, the all-rounder can eye a few personal records on the day to make his birthday even more special.

He is just two runs away from amassing 8,000 One-Day International (ODI) runs.

He is also seven wickets away from completing 400 wickets in ODIs. Though completing this record on the day may require an extraordinary effort, given he has taken only nine five-wicket hauls in his career.

The tournament has so far seen the records for the fastest 200 and 15o being scored by Chris Gayle and AB de Villers respectively. And having lost his crown for the fastest century already, Afridi could fancy taking on the Zimbabwe bowlers to reclaim his record.