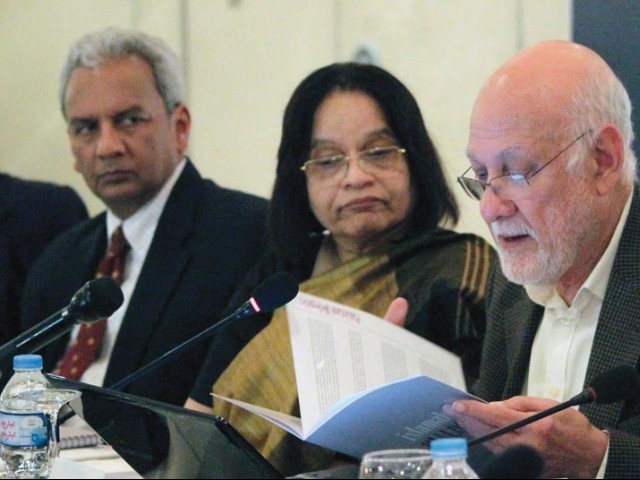 ISLAMABAD: Amid optimism that a new era of sustained dialogue will commence following the forthcoming visit of Indian foreign secretary to Pakistan, speakers emphasised the need to pick up the threads from the Simla Agreement and Lahore Declaration to resolve all outstanding issues.

They made the demand at a two-day Indo-Pak conference titled “Islamabad Dialogue”, which concluded here on Friday.

The conference, jointly organised by Jinnah Institute and the Centre for Dialogue and Reconciliation, saw participation from senior diplomats, parliamentarians, policymakers and journalists from Pakistan and India to discuss bilateral relations ahead of the much-anticipated meeting between the foreign secretaries of both countries on March 3.

The participants discussed a range of issues including resumption of bilateral dialogue, the Kashmir issue, exploring opportunities to bring stability in Afghanistan, challenges being posed by climate change and the increasing role of media in creating conducive atmosphere for improving the bilateral relations.

In a media briefing after the conclusion of the conference, former ambassador Aziz Ahmad Khan said that members of both sides felt that the Indian and Pakistani foreign secretaries had an opportunity to pick up threads from the Simla Agreement and Lahore Declaration to resolve their all outstanding issues.

He said that the participants emphasised the need for strict adherence to the ceasefire and maintenance of peace along the Line of Control (LoC) and the Working Boundary.

It was recommended that hurdles to the agreed upon confidence building measures need to be removed expeditiously, while more needs to be done to facilitate people-to-people contacts and trade between the two countries.

Aziz said that both sides hoped that the resumption of dialogue would be the start of a sustained effort towards building a peaceful, friendly and cooperative relationship.

He said that the participants strongly felt that existing information barriers between the two countries should be removed and steps taken for the exchange of ideas, besides implementing the visa liberalisation regime agreed on between the countries’ foreign ministers in 2012, which provide special non-reporting visa access and multi-entry five-year visas for journalists.

They urged Pakistan and India to cooperate in ensuring stability in Afghanistan.

The conference also urged both governments to take urgent steps to address the challenges posed by climate change to their socioeconomic development, especially regarding food and energy security.