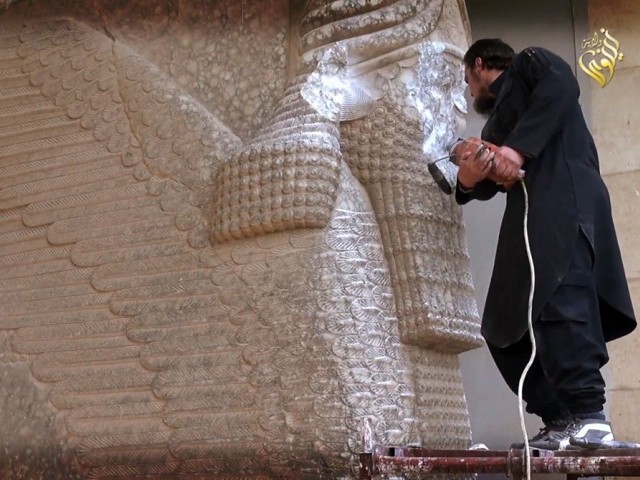 An image grab taken off a video reportedly released by Media Office of the Nineveh branch of the Islamic State (IS) Group on February 25, 2015, allegedly shows an IS militant destroying the statue of Lamassu, an Assyrian diety, with a jackhammer in the northern Iraqi Governorate of Nineveh. PHOTO: AFP

BAGHDAD: A video of militants in Iraq gleefully smashing ancient statues to pieces with sledgehammers sparked global outrage and fears Friday that more of the world’s oldest heritage will be destroyed.

The destruction of priceless Assyrian and other artefacts from the main museum and an archeological site in the northern city of Mosul drew comparisons with the 2001 dynamiting of the Bamiyan buddhas in Afghanistan.

Archaeologists and heritage experts called for urgent action to protect the remains of some of oldest civilisations in the world and the UN cultural agency demanded an emergency meeting of the Security Council. An image grab taken off a video reportedly released by Media Office of the Nineveh branch of the Islamic State (IS) Group on February 25, 2015, allegedly shows an IS militant pushing a statue inside the Mosul museum in the northern Iraqi Governorate of Nineveh. PHOTO: AFP

“This attack is far more than a cultural tragedy — this is also a security issue as it fuels sectarianism, violent extremism and conflict in Iraq,” UNESCO chief Irina Bokova said.

French President Francois Hollande joined the chorus of condemnation, saying: “What the terrorists want to do is destroy all of humanity.”

The Islamic State group has controlled Iraq’s second city since June last year and has destroyed several historical and cultural sites across the country, including Muslim shrines.

In the radicals’ extreme interpretation of Islam, statues, idols and shrines are a material corruption of the purity of the early Muslim faith and amount to recognising other objects of worship than God. An image grab taken off a video reportedly released by Media Office of the Nineveh branch of the Islamic State (IS) Group on February 25, 2015, allegedly shows an IS militant destroying the statue of Lamassu, an Assyrian diety, with a sledgehammer in the northern Iraqi Governorate of Nineveh. PHOTO: AFP

Their views are marginal however and most clerics, even those who promote a rigorist Islam, argue that what were idols in the days of the Prophet Mohammed (PBUH) are now part of cultural heritage.

A bearded militant talking to the camera in the video released on Thursday argues that the destruction happening behind him is a repeat of when Prophet Mohammed (PBUH) destroyed statues of idols in Mecca almost 1,400 years ago.

“The artefacts and statues in the Mosul museum are not idols of gods, but statues of kings, animals, and birds,” said Radwan al Sayyed, Professor of Islamic sciences at the Lebanese University.

“Even if they were statues of gods, they are in a museum, and the Quran calls on drawing lessons from them because they were for people who have long passed and that teaches you that life is finite.”

The Egyptian body which rules on Islamic law condemned the destruction of the Iraqi artefacts, saying the Prophet’s own companions had never demolished ancient heritage. Men use sledgehammers on a toppled statue in a museum at a location said to be Mosul in this still image taken from an undated video. PHOTO: REUTERS

“Such antiquities are to be found in all of the countries conquered by Muslims, but the Prophet’s companions did not order their destruction or even authorise anything approaching it,” said Dar al-Ifta, whose rulings are sought by Muslims from around the world.

Some of the statues destroyed in the video were likely replicas of pieces that had been moved to safety or are kept in museums in the West, experts say.

But several were originals, including the colossal granite Assyrian winged bull at Nergal gate in central Mosul which militants armed with a jackhammer can be seen defacing.

After wrecking the giant statue, IS militants reportedly told the guards of the vast archaeological site that the ancient city of Nimrud, south of Mosul, was next on their list.

“It is one of the very important Assyrian capitals, there are reliefs and winged bulls there… This would be a real disaster,” said Abdelamir Hamdani, an Iraqi archaeologist at New York’s Stony Brook University.

“Maybe they will also attack and destroy Hatra, it is a very isolated site in the desert,” he said.

Hatra is a UNESCO-listed site that lies in IS-controlled territory around 100 kilometres (60 miles) southwest of Mosul.

UNESCO says the “remains of the city, especially the temples where Hellenistic and Roman architecture blend with Eastern decorative features, attest to the greatness of its civilisation.”

On Thursday, IS militants blew up a 12th century mosque, purportedly because it contained a tomb.

They have also destroyed much of the Mosul library’s collection, some of the city’s best-known shrines, as well as historical sites elsewhere in the country.

“This is not the end of the story and the international community must intervene,” Hamdani said.

US and other Western air forces operate in the Mosul area to provide support for Iraqi Kurdish and federal forces that are working their way towards the city.

Mounir Bouchnaki, the director of the Bahrain-based Arab Regional Centre for World Heritage, admitted it would be difficult to physically protect Hatra, Nimrud or other sites in IS areas.

“If you don’t have people on the ground, it’s very difficult and you even risk contributing to the destruction,” he said.

while watching #MosulMuseum profanation ;I saw some iron bars in some statutes legs, I pray ALLAH that all of them are fake