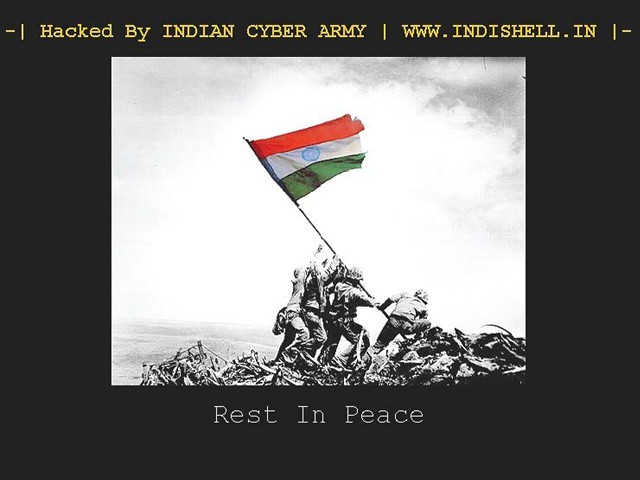 Screenshot of one of the hacked websites. PHOTO: FILE

KARACHI: At least 36 government websites were hacked on Tuesday by a group of hackers going by the name ‘Indian Cyber Army’.

Websites of Pakistan Navy, the National Accountability Bureau (NAB), the ministries of foreign affairs, education and finance, as well as NADRA and the Council of Islamic Ideology were among some of the key websites hacked, aside from at least 30 other local websites.

The 36 government websites were hosted on a single server which allowed the hackers to take over multiple sites simultaneously, stated an e-mail message sent out by the hackers to Pakistani websites.

Some of the sites were rendered inaccessible over the course of the day, while each site hosted a page inserted by the hackers, which displayed a message – along with audio playback – that outlined that the online hack was a form of ‘hacktivism’ in retaliation to the Mumbai attacks.

“Indian Cyber Army owns you. Rest in peace, the heroes of 26/11 who laid their precious lives for the country … because of some Pakistanis, whole of Pakistan is being given bad words,” was the principal message displayed on the hacked pages, which also contained images of Indian security officials killed in the Mumbai attacks.

Two of those involved in the attack, Jackh4x0r and LuCkY, told online hacker portal Hacker Regiment that most of the group members of the Indian Cyber Army were “well settled” professionals.

“Monetary benefits are not the motivation for any of the group members to carry out such cyber attacks. This particular attack was to convey a message to Pakistani citizens on opposing the terror route being followed by their nation to disturb neighbours,” said the two hackers in the interview.

While a majority of the government websites had removed the pages inserted by the hackers, some local websites still hosted the inserted pages at the filing of this report.

Cyber attacks of a similar ideological nature have been increasingly seen on both sides of the border since 2001.

The original article incorrectly quoted that Nadra was hacked.