Cultural heritage: Bohri Bazaar – once a most famous thriving marketplace

Cultural heritage: Bohri Bazaar – once a most famous thriving marketplace 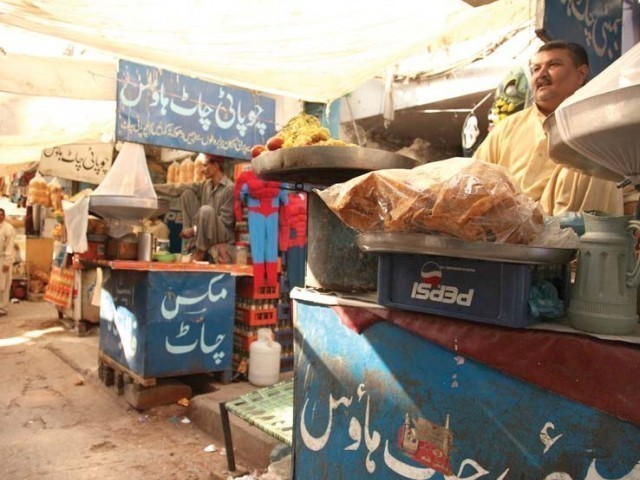 Bohri Bazaar continues on either side of Raja Ghazanfar Ali road, with more or less 5,000 shops spread over a large area in a maze of narrow streets. PHOTO: EXPRESS

KARACHI: Last year I stayed in Istanbul for three days. A visit to the famous Grand Bazaar was on top of sightseeing schedule. Simply because instead of boasting about Cevahir Mall, which is the largest shopping centre in Europe and second largest in the world, the Turks very effectively and successfully promote the Grand Bazaar as a ‘must see’ place to the tourists.

It was undoubtedly a great experience watching tourists from the entire Europe and America rubbing shoulders with Asians. Grand Bazaar being the major landmark of Istanbul is a thriving complex. Between 250,000 and 400,000 people visit the bazaar daily while roughly 30,000 people are employed in the jewellery, carpet and souvenir stores that comprise a majority of the shops situated on 61 covered streets.

In 2011 – the year of its 550th birthday – it was declared as the most visited monument in the world with over 91 million visitors.

According to a modest calculation, if a visitor spends on an average $100, the daily sales proceeds from this market range between $25 million and $40 million, which means the bazaar alone is posting $4.5 million to $7.2 million on a daily basis to the government exchequer (sales tax rate in Turkey is 18%).

While wandering in the Grand Bazaar, I thought of our very own Bohri Bazaar, which was once the most famous, congested and probably the only shopping place in Karachi. Had our city fathers a vision and prepared a plan to rebuild and renovate it on the lines of Istanbul’s Grand Bazaar, it could have safely been our answer to the latter.

They could have developed it on the similar pattern as the Grand Bazaar, which achieved its final shape in the beginning of the 17th century and according to several European travellers, at that time, and until the first half of the 19th century, the market was unrivalled in Europe with regard to the number of tourists, variety and the quality of goods on sale.

Bohri Bazaar continues on either side of Raja Ghazanfar Ali road, with more or less 5,000 shops spread over a large area in a maze of narrow streets. It is assumed that approximately 50,000 people visit this place daily and according to a rough estimate the business activities are in the range of Rs20 million to Rs50 million.

It is very unfortunate that tourists even from other cities of the country never visit this historic bazaar, only those who live in and around the market come here for shopping. This place can certainly be developed into a grand shopping centre with a lot of potential to attract foreign tourists, for they have a special longing for visiting ancient places with a cultural heritage. A lot of such old bazaars in various parts of the world are still famous for tourists.

Not that our city planners and architects never thought of converting this haphazard and unplanned shopping area into a real cultural heritage with a neatly planned and well-organised shopping city. In fact, over five decades ago, Hussain D’Silva Construction Company floated a massive plan for the renovation and redevelopment of Bohri Bazaar, then the landmark of Karachi.

But unfortunately the plan remained pinned to the drawing boards and despite frantic efforts from the company it failed to get the go-ahead from the then city bosses.

According to reports, the plan involved reconstructing and modernising the whole market, and was put forward after a gruesome fire at the bazaar in 1958. As per plan, the entire bazaar was to be transformed into a shopping city of international standards, impressive enough to compete with any such complex in the world.

The project included car parking, underground taxi-rickshaw stand and walkways in open spaces. In addition, the nearby heritage site, Parsi Dare Meher, the worship place for Zoroastrians which is also referred to as ‘fire temple’ – one of the oldest architects of the city and even after six decades is still very well maintained – was to be protected and renovated so that the general public was made more aware of its importance.

The implementation of the plan would have saved Bohri Bazaar from a host of problems it faces today, including crumbling construction, encroachments on roads, lack of parking space and increased traffic on narrow lanes of the market.

The massive area from Zaibunnisa Street to Parsi temple and from Frere Road to Shahra-e-Iraq could have been transformed into a grand shopping city, neat and enormous enough to attract the tourists.

According to available reports, the plan could not be implemented mainly because of protests by residents of the area and occupants of the bazaar, despite the fact that the company had offered them compensation and alternative accommodation.

In fact, the residents and the shop-owners were not sure that they would be compensated according to prevalent market rates. On the other hand, the very idea of dislocation, resettlement and a host of such fears prevented them from taking a decision. But then there is a section of old shopkeepers who claim that they were not aware of the plan.

Many charitable bodies have a business motive