Says he will meet Afghan Presid­ent and other leader­s to make his assess­ment on the way forwar­d
By AFP
Published: February 21, 2015
Tweet Email 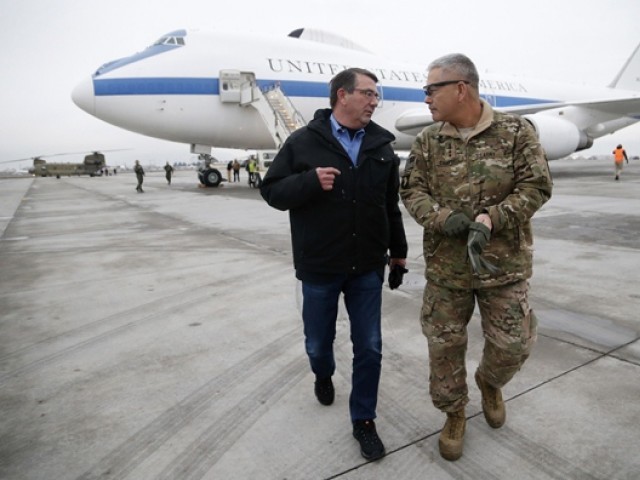 US Secretary of Defense Ashton Carter (L) walks with US Army General John Campbell, who greeted him upon his arrival at Hamid Karzai International Airport in Kabul . PHOTO: AFP

KABUL: The Pentagon’s new chief, Ashton Carter, flew to Kabul on Saturday to confer with commanders and Afghan leaders about the future of the American military presence in Afghanistan.

Only days after taking the helm as defense secretary, Carter paid an unannounced visit to a country where US troops have been deployed for more than 13 years but are now in a scaled back role.

“The reason for this destination, Afghanistan, in my very first week in office as the secretary of defense is because this is still where we have 10,000 American troops. They come first in my mind, always,” Carter told reporters aboard his plane before landing in the Afghan capital.

Carter’s visit comes as President Barack Obama faces a decision about the timetable for a troop drawdown in Afghanistan. Under the current plan, the 10,000-strong force is due to drop to roughly 5,000 by the end of 2015 and then pull out altogether by the time Obama leaves office in two years.

But the Obama administration has already adjusted the pace of the withdrawal, allowing 1,000 additional American forces to remain this year.

And the US commander on the ground, General John Campbell, has suggested he favours slowing the drawdown further, though the details of the possible options before Obama remain unclear.

In testimony before senators this month before he was sworn in at the Pentagon, Carter signalled he was open to revising the troop withdrawal schedule if necessary.

Afghan leaders and some lawmakers have urged Obama to reconsider the withdrawal timetable, warning that an early US exit could jeopardise security and discourage international aid.

Carter was due to hold talks with the US commander in Kabul, Campbell, as well as General Lloyd Austin, head of US Central Command which oversees American forces in the Middle East and Central Asia, who travelled to Kabul to take part in the talks.

The Pentagon chief said he had already spoken to Campbell and that he wanted to get a first-hand look at the mission to shape his sense of “how to complete the campaign in a successful way.”

Asked about the presence of the Islamic State group in Afghanistan, Carter played down the threat, saying some Taliban insurgents were making an attempt at “rebranding” themselves.

“The reports I’ve seen still have them in small numbers and aspirational,” he said.

His trip coincides with a concerted effort by Ghani to promote peace talks between Kabul and the Taliban, with Pakistan voicing strong support for the initiative.

But Carter declined to offer an assessment of the prospects for possible negotiations.

“President Ghani has made that a priority of his and that’s a priority that we support,” he said. “I’ll have a better chance to assess that after I’ve heard from him.”

The United States and a Taliban spokesman this week denied there were new plans to hold peace talks in Qatar, despite claims by some militant leaders.

Carter planned to speak to troops outside of Kabul on Sunday after holding talks with Ghani and Chief Executive Abdullah Abdullah on Saturday.

The United States first launched military action in Afghanistan after the September 11, 2001 attacks, toppling the Taliban regime that had refused to break ties with Al-Qaeda.

A US-led NATO force eventually swelled to 130,000 troops, but last year the mission wrapped up its combat operations against Taliban insurgents. A contingent of 12,500 foreign troops has remained to back up Afghanistan’s 350,000 soldiers and police.