Reeling in the aftermath: In Swat, cash-strapped govt schools fail to obtain NOCs

Reeling in the aftermath: In Swat, cash-strapped govt schools fail to obtain NOCs

Delays sugges­t these instit­utes will not reopen until March.
By Fazal Khaliq
Published: February 21, 2015
Tweet Email 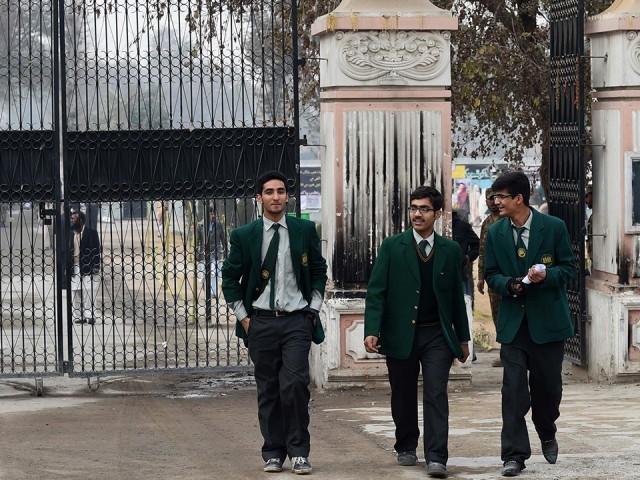 So far, only private schools have fulfilled security requirements and obtained NOCs from the district government. PHOTO: AFP

MINGORA: A large number of government schools across Swat Valley might not be issued no-objection certificates (NOCs) as they have failed to follow security guidelines, police officials told The Express Tribune on Friday.

According to the district police office in Swat, further delays in receiving a green signal from the district government suggests these schools will not reopen until March.

The provincial government has devised a security plan to ensure the safety of students and teachers following the Army Public School (APS) attack which claimed over 150 lives on December 16, 2014.

“Both government and private schools were directed to introduce security measures before the winter vacations ended,” he said. “They were asked to install CCTV cameras, metal detectors, hire security guards and raise the boundary walls of the building. However, only a few schools have managed to implement these measures.”

So far, only private schools have fulfilled security requirements and obtained NOCs from the district government.

When contacted, heads of public schools said the government has not provided them with financial assistance to introduce security measures.

“In order to implement security plans, we will need a great deal of money,” said Gul-e-Khandana, head teacher at Government Girls Primary School in Arkot. “But we don’t have sufficient funds. The government has asked teachers to buy their own weapons. They have also refused to provide head teachers with android phones through which they can inform the police about any untoward incidents through a security software.”

According to Gul-e-Khandana, teachers attend meetings in both Matta and Mingora on a daily basis to discuss security arrangements. “The government has not provided us with conveyance,” she said. “At first, we were given a travel allowance. Now, we have to make our own transport arrangements.”

Abida, another head teacher of a government primary school, said the cost of raising the school’s boundary walls is approximately Rs350,000.

“However, my school’s annual fund is Rs21,000,” she said. “The government has asked us to borrow money to make security arrangements. The education department has even promised to help us repay these loans. But no one is willing to lend such a huge amount to us.”

Deputy District Education Officer Zulfiqarul Mulk confirmed the implementation of security plans at government schools is subject to availability of funds. Nonetheless, he said they will adhere to the K-P Elementary and Secondary Education department’s directives and reopen these schools only once the security arrangements have been made.