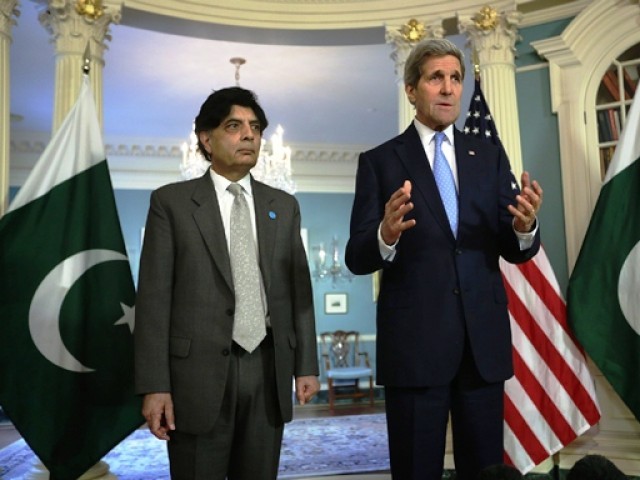 US Secretary of State John Kerry (R) and Interior Minister Nisar Ali Khan speak to members of the media prior to a meeting at the State Department in Washington, DC. PHOTO: AFP

WASHINGTON DC: Relations between Afghanistan and Pakistan have never been better, a top Pakistani minister said Thursday, adding there had also been “a quantum leap in trust” between Islamabad and Washington.

“I think Afghanistan and Pakistan, working in close hands and in close cooperation, it will do wonders for the cooperation in the field of counterterrorism,” Interior Minister Chaudhry Nisar Ali Khan said as he met with top US diplomat John Kerry.

“Relations between Afghanistan and Pakistan have never been better, and that is a very, very positive development.”

Pakistan’s army chief General Raheel Sharif held talks in Kabul on Tuesday with Afghan President Ashraf Ghani on boosting security and continuing operations against Taliban militants, the Pakistani military said. The two men had also praised improved relations between the neighbors, which have seen a series of high-level talks.

Khan was attending a three-day White House summit on ways to battle violent Islamic extremist groups. Kerry also praised what he called “an unprecedented level of effort to try to produce cooperation” between the two neighbors which he said was producing “some signs of real results.”

Ties between Washington and Islamabad hit a low point in recent years after the 2011 killing of Al-Qaeda leader Osama bin Laden, shot dead during a US special forces operation in the Pakistani military garrison town of Abbottabad. But both countries have worked to improve relations, and Kerry visited Islamabad in January as the two nations vowed to step up cooperation to track down militants in Pakistan’s lawless tribal areas.