ASWJ stages protests after leader gunned down in Rawalpindi

ASWJ stages protests after leader gunned down in Rawalpindi 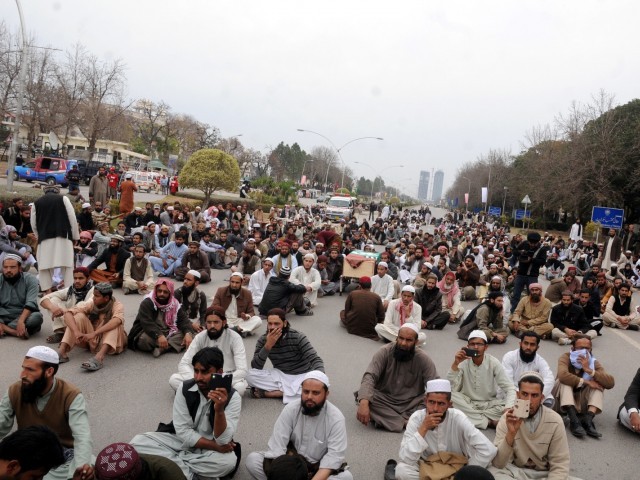 ISLAMABAD: Ahl-e-Sunnat Wal Jamaat (ASWJ) protesters staged protests in Islamabad and Karachi after its local leader was gunned down in Rawalpindi, and another leader escaped an assassination attempt in Karachi.

Maulana Mazhar Siddiqui, 35, the spokesperson for ASWJ’s Rawalpindi chapter, was heading to the Pirwadhai bus stop in Rawalpindi with two other companions on Sunday morning to catch a bus for Lahore when unknown assailants riding on a motorcycle opened fire at them. Siddiqui was killed and one of his companions, Muhammad Ibrahim, was injured.

“Siddiqui was sitting at the backside of the rickshaw and was shot six times,” said ASWJ spokesperson Islamabad, Hafiz Oneeb.

Following the post-mortem, ASWJ activists took to the streets in Islamabad and marched towards the Supreme Court on Constitution Avenue along with Siddiqui’s body.

Police said that they initially tried to stop workers of ASWJ from entering the Red Zone at Nadra chowk, baton charging and tear gassing the protesters. But the police later allowed them to stage a demonstration right outside the Supreme Court.

The protesters demanded that the culprits responsible for the incident should be immediately arrested, and that the National Action Plan is implemented in letter and spirit. They further demanded compensation for the heirs of slain ASWJ workers, and security for party officials.

In his address, ASWJ chief Maulana Muhammad Ahmed Ludhianvi said if the killers of former president General (retd) Pervez Musharraf could be hanged, why can’t the government arrest those involved in the killing of ASWJ’s workers.

To defuse the situation, adviser to the prime minister Irfan Siddiqui held talks with the ASWJ leadership.

After the adviser assured ASWJ leaders that a committee will immediately be constituted to investigate Sunday’s killing, the ASWJ called off its seven-hour long protest and offered funeral prayers for Siddiqui.

Meanwhile, the ASWJ staged a sit-in in Karachi against the assassination attempt on their local leader Aurangzaib Farooqui early on Sunday.

Activists and supporters of the religious party gathered around Quaidabad roundabout at 4pm, and shouted slogans against the government, claiming that their chief had been attacked because the government had taken away his security.

After police assured them of registering a case against civil society activist, Jibran Nasir and Khurram Zaki, the protesters dispersed.

Farooqi escaped an assassination attempt in Karachi on Saturday night, and his security protocol was taken back following a protest led by Nasir, Zia and others in the first week of the ongoing month outside the Chief Minister House in Karachi.