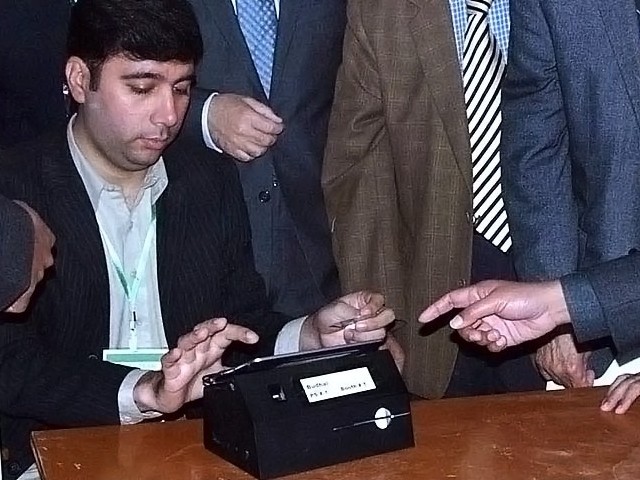 Officials of two cellular companies tell The Express Tribune that the biometric thumb verification process was started on the directives of the Pakistan Telecommunication Authority. PHOTO: APP

PESHAWAR: The young, the old, the healthy and the weak all stand patiently in long queues at cellular companies’ franchises because their ability to stay connected depends on it.

Saifullah, 66, has been trying to get his SIM biometrically verified for the last one week. Standing outside a franchise at Nishtarabad near Arbab Sikandar Khan Khalil flyover, the elderly man is making yet another attempt. “I do not understand the workings of the biometric verification system,” he says perplexed.

Saifullah says he visited a cellular franchise in Khyber Bazaar to block one of his numbers and have another verified. However, the number he wanted verified got blocked and vice versa. He was then told to contact a particular franchise of the company.

He believes the government is not sincere in resolving the problems of the masses, adding it was the responsibility of the authorities to make the verification process trouble-free. Saifullah added thousands of other elderly folks are facing similar problems.

Neelam Jabeen, 34, says she visited a franchise with her younger brother for thumb verification of a SIM she purchased around three years ago. “I use my mobile phone to keep in touch with my husband, who lives abroad,” Jabeen says.

Asfandyar Khan, a college student, tells The Express Tribune that although he bunked class to reach the franchise early, he failed to verify his SIM. “I bought this SIM some six years ago from a local retailer,” he says.

The student adds he called a number to have his SIM verified three years ago by providing details of his CNIC. “Now they have introduced the biometric thumb verification system and I don’t understand why.”

Officials of two cellular companies tell The Express Tribune that the biometric thumb verification process was started on the directives of the Pakistan Telecommunication Authority.

They added all companies welcomed the decision of the federal government, saying it was a more thorough form of verification.

The date to have SIMs verified through the biometric system has been extended till February 26.