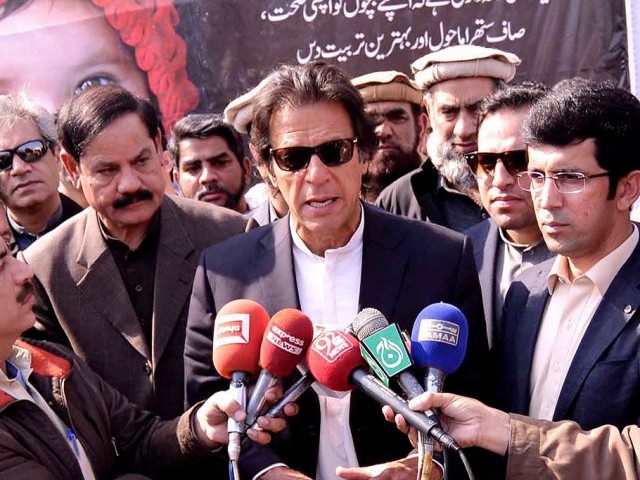 Khan was speaking at the inauguration of ‘Sehat ka Ittehad’ at Police Services Hospital. PHOTO: NNI

PESHAWAR: Pakistan Tehreek-e-Insaf (PTI) Chairperson Imran Khan on Friday said deep-seated political differences will not come in welfare’s way. Both the federal and provincial governments have joined hands to eradicate preventable diseases from Khyber-Pakhtunkhwa and the Federally Administered Tribal Areas (Fata), he added.

The PTI chief said the extensive campaign is significant not only for the target areas but for the entire country, claiming he has set political differences aside for the future of the country.

Khan said a large-scale vaccination drive with the help of the armed forces will help prevent the spread of epidemics such as poliovirus. “Earlier, we focused on K-P only while adjoining areas were equally at risk,” he said.

He said the health and education sectors will see change only when they are granted full autonomy and support from all state institutions. “This is one of the reasons why Shaukat Khanum Hospital is a success,” he said, adding the collaborative effort of the province and Centre will soon bear fruit. The PTI chairman said Governor Mehtab Ahmad Khan and Pakistan Army have extended full support in this regard.

While briefing the attendees on the occasion, project officials said the campaign will continue till May 15, 2015. The region has been divided into central and southern blocks. The central block includes Peshawar, Charsadda, Nowshera, Mardan, Swabi, Khyber Agency and FR Peshawar. The southern block comprises Kohat, Karak, Hangu, Bannu, Lakki Marwat, DI Khan, Tank, North and South Waziristan agencies along with FR Bannu.

Seven polio drives will be conducted during the course of the campaign and health camps will be set-up across the region. A total of 3.56 million children will be inoculated against the nine diseases.

On January 22, the provincial and federal governments decided to conduct a large-scale campaign during an apex committee meeting called to discuss the implementation of the National Action Plan. The meeting was attended by Governor Mehtab Ahmad Khan, Chief Minister Pervez Khattak and Peshawar Corps Commander Lieutenant General Hidayatullah Rehman who gave the green signal to the proposed campaign.

On January 28, K-P Home and Tribal Affairs secretary was nominated as the chief coordinator of the working group which will implement the strategy in K-P and Fata.