January figures: Trade deficit contracts by more than half

January figures: Trade deficit contracts by more than half

Gap shrink­s due to declin­e of almost 25% in import­s.
By Our Correspondent
Published: February 12, 2015
Tweet Email 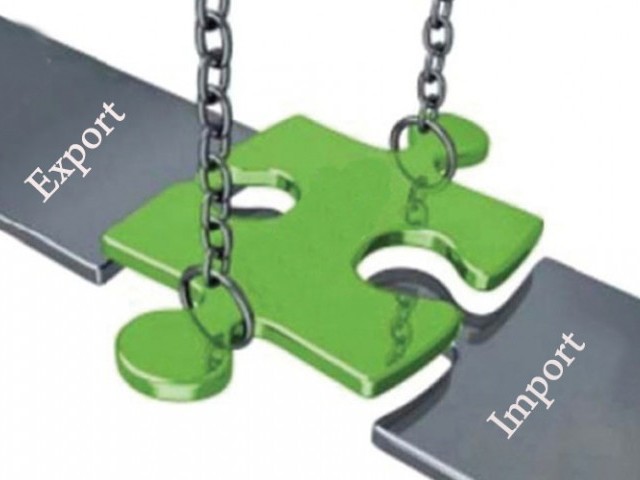 Imports stood at $3.1 billion, which were $1.1 billion or 26% less than the imports in the same period of previous year. STOCK IMAGE

Pakistan’s trade deficit contracted by more than half in January as the gap narrowed to less than a billion dollar on the back of a one-fourth contraction in imports while the continuous negative growth in exports also stopped, at least temporarily.

The trade deficit narrowed to just $999 million, which was $1.1 billion or 51.9% less than the comparative period of the previous year, reported the Pakistan Bureau of Statistics (PBS) – the national data collecting agency.

Despite a slump in global oil prices, the trade deficit had ballooned in previous months due to bulk imports of military hardware. This denied any advantage of the reduction in oil prices to the balance of payments.

In January, the country shipped $2.06 billion worth of goods, which were almost at last year’s level or 0.15% higher. Imports stood at $3.1 billion, which were $1.1 billion or 26% less than the imports in the same period of previous year.

During the first seven months of the current fiscal year, although there was a reduction in the growth of imports, the overall trend remained the same.

The trade deficit widened by 18% to $13.1 billion in the July-January period on the back of a significant contraction in exports and growth in imports, but it slowed down to single digit.

Exports contracted by 3.7% in July-January, amounting to $14.1 billion, stated the PBS. Export receipts were $541 million less than the comparative period of the last fiscal year.

Contrary to the contraction in exports, the import bill increased to $27.3 billion in the first seven months, showing an increase of $1.5 billion or 5.6% over last year’s imports.

The decline in exports reflects the impact of the energy crisis and the slowing global economy, factors that have equally affected Pakistan’s chances to build foreign currency reserves through non-debt creating instruments.

The widening trade deficit suggests that the current account deficit – the gap between external receipts and payments – would be far higher than the budgeted $2.8 billion or 1.1% of GDP, according to an economist working with a government agency.

However, the International Monetary Fund’s latest projections show that the current account deficit will be around 1.2% of GDP.

The national planners have projected a 5.8% growth in exports and a 6.2% growth in imports for the current fiscal year. Imports will increase to $44.2 billion against exports valuing $26.99 billion, showing a trade deficit of $17.2 billion.