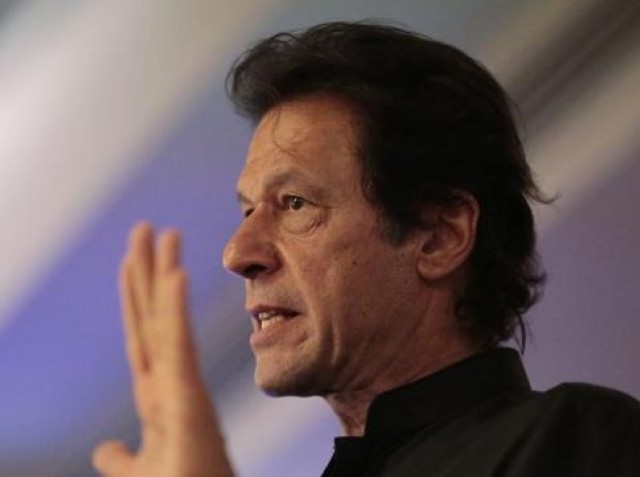 Amid an escalating war of words between the Pakistan Tehreek-e-Insaf (PTI) and the Muttahida Qaumi Movement (MQM), leaders of the two rival parties unleashed a fresh barrage of accusations against each other on Monday.

PTI chairman Imran Khan used the Joint Investigation Team (JIT) report into the 2012 deadly blaze at a garment factory in Karachi’s Baldia Town to launch a frontal attack on the MQM. He called upon the government to set aside political expediencies and take action against the party.

“Prime Minister Nawaz Sharif should shun political expediencies and take action against the MQM,” Imran said while speaking at a news conference at his residence in Bani Gala on the edge of Islamabad.

Imran’s media interaction came three days after the JIT report submitted by the Rangers in the Sindh High Court claimed that the MQM was behind the Baldia factory inferno that devoured the lives of at least 258 factory workers.

Referring to the September 2010 killing of MQM founding member Dr Imran Farooq in a northwestern London neighbourhood, the PTI chief said the Pakistani government should send the two witnesses in its custody to the United Kingdom to testify against Altaf Hussain.

“This is the time to take action, if you really want to eliminate terrorism from the country,” he said addressing the government.

“We know the MQM is the killer of PTI member Zahra Shahid and journalist Wali Babar yet the government is reluctant to take action,” Imran said, adding that people were fed up with armed groups and it was high time that they were disarmed or else it would become impossible for the police to tackle them.

The PTI chief said that his party would file a defamation suit in a UK court against Altaf Hussain for his derogatory statements against women members of the PTI. “We will approach the British High Commission against Altaf,” he added.

Imran said that the MQM should disassociate itself from the man who was facing court trials in the UK. “Altaf has ruined Karachi and is hiding in the UK,” he said.

In a scathing rejoinder to Imran, MQM leaders rubbished Imran’s allegations as baseless and condemnable and instead called the PTI ‘political wing of the Taliban’.

“Today we know that you [Imran] are part of a bigger conspiracy to destabilise Pakistan. You’re doing the same that you tried to do in Islamabad with your dharnas but failed miserably,” said MQM leader Haider Abbas Rizvi at a news conference. He claimed that Imran’s actions were pre-planned.

Imran did not register the FIR of Zahra Shahid’s murder nor did he attend her funeral despite being in Karachi, Rizvi said, adding that Imran never bother to visit the homes of the schoolchildren killed in the December 16 APS Peshawar attack and did not openly condemn the Taliban.

“The Taliban has rigged the whole [2013] election for the PTI. You [Imran] are a Taliban supporter and want a Taliban raj in the country,” Rizvi said, adding that the PTI leader was willing to do anything to become the country’s prime minister. Rizvi further said that Imran was welcome to go to London and file any case.

The MQM politician said that the MQM was not considered bad when the PTI made calls to its international secretariat to seek support for jalsas in Karachi. “I wonder whose dictates he [Imran] is following!”

Another MQM leader Dr Farooq Sattar said Imran’s actions showed that he wanted to weaken democracy in Pakistan, and that he was protecting terrorists.