The lawsui­t seeks immedi­ate compen­sation of Rs432,000 or $4,320 for every worker killed in the factor­y
By Saad Hasan
Published: February 9, 2015
Tweet Email 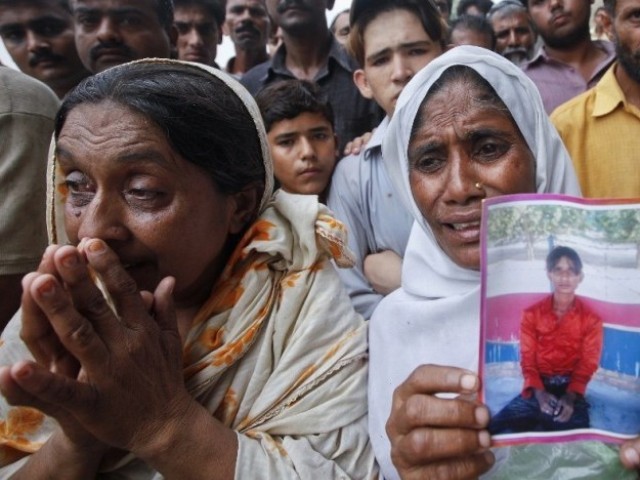 This would just be a precursor to negotiations for a bigger compensation package. PHOTO: REUTERS

KARACHI: Last year, Muhammad Ali finally bought a small house in the congested Muslim Mujahid Colony where his family resided for a year as tenants. When the day final payment was made, he sobbed. To this day he cries while talking about it, perhaps because it was a parting gift from his son who had died in the Baldia factory over two years ago. Now, the families of those who died, have decided in principle to sue the German retailer who sourced products from the ill-fated factory.

Like any other household in this part of Karachi’s Baldia Town, located on the fringes of Site Industrial Estate; men receive minimum wages for doing odd jobs in factories, as machine attendants in day time and driving taxis after sunset.

With this never-ending struggle to put food on the dastarkhwaan, owning a small bare-bricked house remained a luxury, especially when most of the household income is spent on medicines for old parents.

Hence, those living on rented premises often miss out on their payments. And when that happens, the landlord harasses them. Ali’s case was no different.

But one day after the landlord left, following the usual bickering and threats, his 23-year-old younger brother, Israr swore he would buy the house.

And he did – from the compensation his family received after his death at the Ali Enterprise garment factory, which was gutted in the one of the worst industrial fires in September 2012.

“How can I ever thank him?” said Ali. “How can my family forget the sacrifice? How can we back out from this fight now? There is no turning away from this struggle.”

Ali was among the relatives of 250 workers killed in the factory fire, who gathered at the Pakistan Medical Association on Sunday to give their consent to initiate a lawsuit against the German discount retailer KiK, which sourced products from Ali Enterprises. This would be the first time a German retailer is being taken to court over allegations that it did not care about the conditions of the overseas facilities where its products were made, lawyers say.

“Hence the odds are stacked against us,” said Dr Miriam Saage-Maaß, Legal Director at European Centre for Constitutional and Human Rights, an NGO representing the victims and their families.

“We cannot guarantee anything or even state the probability of winning this case, but I have hope.”

The lawsuit seeks immediate compensation of Rs432,000 or $4,320 for every worker killed in the factory.

This would just be a precursor to negotiations for a bigger compensation package, which takes into account not just loss of income but also the pain and suffering of the family members.

“It won’t be an easy journey. A case like this can drag on for years,” she told PMA’s jam-packed auditorium. “But we can go through this if we stand together.”

KiK, which is part of Tengelmann Group, has already given a total compensation of $1 million to the families.

“But that was just an interim compensation. When the agreement was signed the company had promised a bigger package.”

By its own account KiK was the single largest purchaser from Ali Enterprise, buying 75% of the garments manufactured in Karachi – a fact that has raised lawyers’ hopes.

KiK was also one of the many international retailers doing business with factories housed in Bangladesh’s Rana Plaza building, which collapsed in April 2013, killing over 1,000 workers.

But in that case, involvement of multiple discount stores based in different countries has made legal proceedings difficult.

There is another side of the equation. In countries like Pakistan where textile remains the backbone of the economy, employing the largest chunk of workforce and a reduction in fresh orders can have far-reaching consequences.

KiK itself is scouring for new suppliers in less riskier markets.

The recent revelation by Sindh Rangers that the Muttahida Qaumi Movement (MQM) workers set fire to Baldia factory because of a dispute over protection money could not have come at a worst time.

“Whoever may have caused that fire, the fact remains that most of the workers were burnt alive and suffocated because windows were sealed with iron grills and there were no exits,” said Mansoor. “It was negligence on part of the owners of that factory and whoever was doing business with them. We won’t let this fact be lost amid this controversy.”