Spirit of Rajasthan: ‘No one celebrates on parched land’

Spirit of Rajasthan: ‘No one celebrates on parched land’ 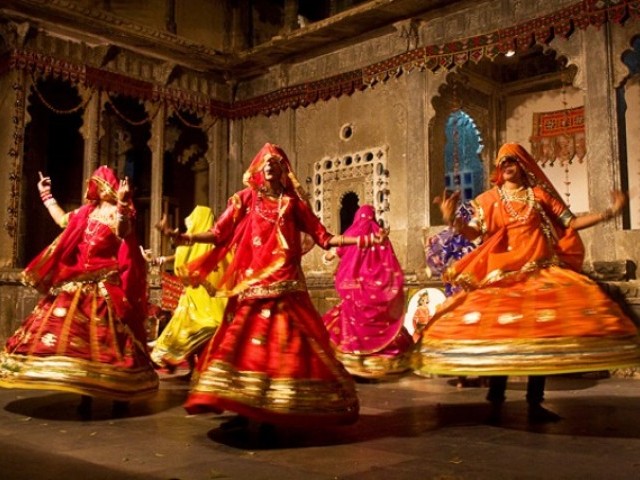 MITHI: Thar has lost its spirit to celebrate. This year, women will not be wearing their green ghagras and performing the Rajasthani ghoomar dance to welcome the rains, as they would at every Teej Festival. Teej would have been held this August, but after another drought last year, Tharis say they have no reason to celebrate.

“Celebration?” asked Khemi, who goes by one name.  “When people are dying of food shortage around you, how can one celebrate? How can starvation ever lead to celebration?”

At 60, her skin is wizened, but she looks bright in her purple ghagra with white bangles up to her shoulders.

The festival is celebrated by Hindus of Rajasthan in both India and Pakistan. It is observed on the third day of the Hindu lunar month of Shraavana, also known as Sawan, as it  falls during the monsoon season when the desert turns green after the rains. This is why the Shraavana Teej is also called Hariyali (greenery) Teej.

The festival is celebrated in remembrance of the reunion of Lord Shiva and goddess Parvati on the day when Lord Shiva accepted Parvati as his wife. According to Hindu mythology, Shiva isolated himself after the death of his wife Sati. Sati then reincarnates as Parvati. It takes Parvati 108 rebirths, penance and fasting for years before Lord Shiva accepts her as his wife.

The Teej festival is traditionally celebrated by women, especially married women who pray for a long and happy married life. Married women, irrespective of age, go to their parents’ home on the day of Teej and new clothes, usually gifted by her parents, are worn along with bangles and bindis.  Thari women also organise a special lunch for themselves that day.

Khemi said lapsi, a Tharparkar favourite prepared by mixing wheat and jaggery in desi ghee, is mostly served.  “Besides lapsi, there are several confectionery items like ladu and ghevar that are prepared for the festival.”

Khemi lives in a small mud house in Phangrio village and works at a carpet loom. She has two daughters, both of whom are married. “Even if my daughters come home to celebrate Teej with us, we don’t have any wheat or jaggery to serve them.”

Lakshman Singh, a resident of Haweli village, has one sister. He wanted to bring her home but said he was not sure if fate will grant it. “The drought is due to climate change. The winter that starts in December now used to start in October a decade ago. We need awareness and education on how to handle these changes,” he said.

Poet Bharumal Amrani, who belongs to Chelhar village that falls 30 kilometres east of Mithi, said Thar is the land of bahrani, which means that life in Thar depends on rain. “Without rain, there is no life here and no reason to rejoice,” he said. “The Teej festival is also a celebration to welcome the monsoons. When it rains, the desolate landscape of Thar looks like a green valley, he added. “It’s during that heavenly time that Teej is celebrated.”

The festival was not celebrated last year either because of the drought. One year without rain pushes the region back by five years, residents say.  “It has not rained in three years now,” Amrani added. “I do not foresee us welcoming the monsoon season this year either.”

While reciting the folk doha, a self-contained rhyming couplet in poetry, Amrani said Teej is both a religious and cultural festival. Usually by the time the month of Sawan sets in, it has already rained twice, and we are all ready to harvest our crops. We celebrate our hopes as Teej.”

There are as many as 142 folk songs for this festival. Explaining the lyrics of one song, he said “When the brothers or fathers of married women go to their homes, the girls stand by the entrance to get a glimpse of their family. If they (the brothers or fathers) do not come, the girls weep until their eye-shadow smudges around their eyes.” “I believe the women are going to weep this year.”

Recalling how it once used to be, Amrani said women from the village would gather at a central point. This is where the special lunch would usually be held, while girls exchanged gossip about their in-laws.”

Khemi says after three years without rains, she does not care about the festival any more. “It was a tradition set by our elders centuries ago, but it can’t be followed anymore. No one celebrates on a parched piece of land.”